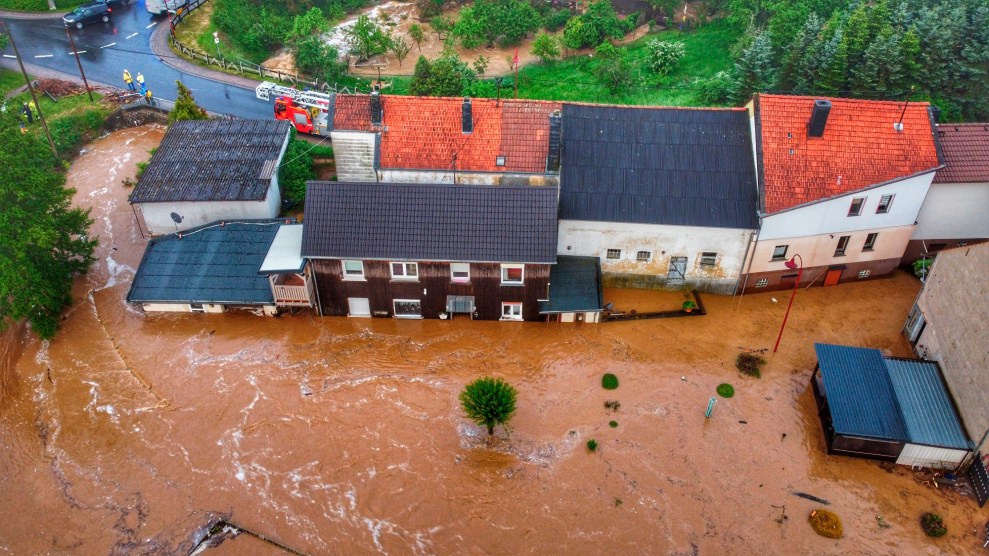 More than 100 people are dead in Germany, Belgium, and other parts of Western Europe with hundreds more missing, after record rainfall this week caused extreme flooding in the region. This part of Western Europe got what amounted to two months’ worth of rainfall in just two days.

The images coming out of the region are horrific.

More than 1,000 people were missing and more houses were destroyed in flood-stricken regions in western Germany and Belgium where further flooding was feared with the death toll already over 100 https://t.co/48IXselNL5 pic.twitter.com/IkKa3x9MTb

These photos from @BezRegKoeln show the devastation caused by the torrential rain and #floods in #Germany, which reportedly killed dozens of people
Our thoughts are with everyone affected
Fotos: Rhein-Erft municipality pic.twitter.com/MVLonIGVnb

JUST IN: The number of people who have died in floods in western Germany rose to 103, according to authorities, bringing the total death toll in western Europe to at least 117: https://t.co/L5zQH9UYE3 pic.twitter.com/OwXwWfmEfV

They’re also a heartbreaking reminder of what scientists have been warning for years: that global warming will continue to fuel an uptick in extreme weather events until nations the world over take urgent action to slow climate change.

As rain continued to fall in Europe on Thursday and Friday, officials and scientists were quick to make a clear connection to climate change. “We are slowly approaching a new normal that includes different rainfall patterns,” warned Johannes Quaas, a meteorologist at Leipzig University. A warmer atmosphere holds more water and thus dumps more water during heavy storms.

“Science tells us that with climate change we see more and more extreme weather phenomenons that last longer,” said Ursula von der Leyen, the president of the European Commission, during a news conference on Friday. “It is the intensity and the length of these events where science tells us this is a clear indication of climate change…It shows the urgency to act.”

During an address in Berlin, German President Frank-Walter Steinmeier expressed grief at the growing death toll and called for immediate climate action. “It is a tragedy that so many have lost their lives. It leaves me stunned,” he said. “Only if we take up the fight against climate change decisively, we will be able to prevent extreme weather conditions such as those we are experiencing.”

Several climate scientists speaking to the Guardian on Friday drew connections between the flooding in Europe and the extreme weather events that have occurred elsewhere this summer, including heat waves that have roiled Canada and the Western US, where a 130 degree temperature was recorded this month. “This is not a localized freak event,” climate scientist Daniel Swain told The Guardian. “It is definitely part of a coherent global pattern.”

German Chancellor Angela Merkel came to Washington earlier this week and met with Joe Biden as flooding engulfed Germany and parts of its neighboring countries. After their meeting, the pair announced plans for a “climate and energy partnership.”

“When Paris Accord was set, we thought we had established just how serious it was,” Biden said, referring to the climate change mitigation agreement signed by nearly 200 counties in 2016. “But things have gotten much more dire since even that date,” Biden said, adding that the pair had discussed the need to “up the ante” on climate change.