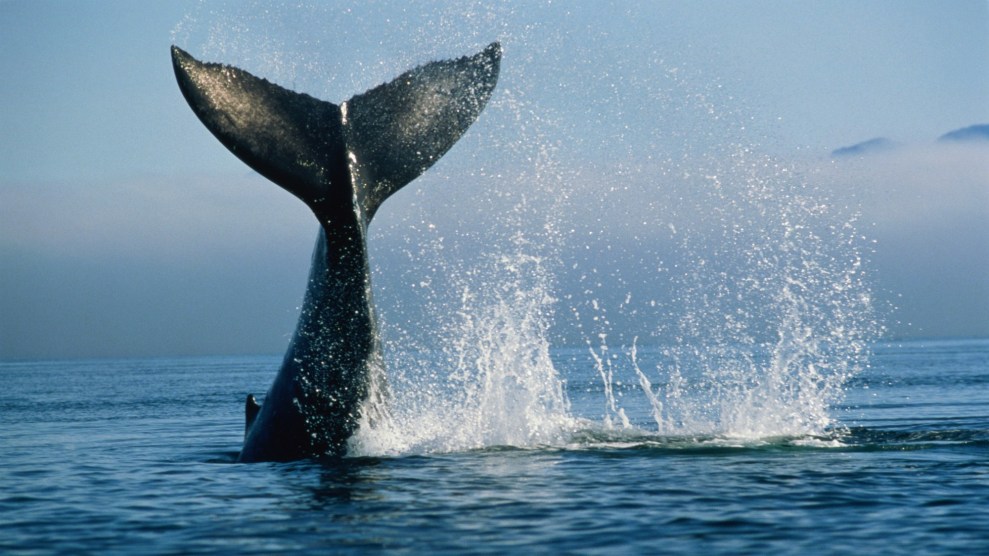 Whales might poop more than scientists previously thought. That’s one conclusion of a paper published Wednesday in Nature, in which researchers spied on baleen whales with suction-cup sensors and drones to discover how much they eat. Previous estimates of how much whales poop were based on stomach contents, and captive animals, like orca. But the new paper suggests that baleen whales (who count the blue whale in their number) eat about three times more krill than the scientists thought they did. And given that what goes in must come out, that means they poop more too.

While Matthew Savoca, a postdoctoral research fellow at the Hopkins Marine Station of Stanford University and an author on the study stresses that his findings are not the final answer on how much whales poop, one thing is certain: more whale poop is excellent news. For all of us.

If you are not familiar with whale poop, you should know that it is awesome, visually.

First, if you are not familiar with whale poop, you should know that it is awesome, visually. Take a moment to picture a pooping whale. A blue whale rises from deep in the Atlantic Ocean, toward the surface, where there will be less pressure working against its bowels. It breaks the water’s skin with a foaming exhale, propels itself forward with its gigantic fluke, and releases from its posterior a neon-hued plume of jello-like excreta. Loose clumps bob to the surface—a treasure. (If you’re not convinced yet, bear with me.)

Not all whale poop looks like this. Each poop is unique. Depending on the type of whale and its dinner, feces can be neon yellow to brick red; fleecy in texture to having the consistency of liquidy breadcrumbs. (You can find a video of a blue whale pooping neon poop here.) The smell can also vary from whale to whale. Dr. Joe Roman, a conservation biologist and writer at the University of Vermont, says that when they are eating fish, humpback whale poo smells “very mild.” He figures the poop of endangered right whales is among the worst, with a scent reminiscent of sulfurous, briny dog crap. “If you get right whale feces on your clothes, it doesn’t matter how much you wash it,” he says. “You basically have to throw it away.”

Scientists put up with dealing with this smelly-jello because it offers important data on somewhat mysterious creatures–it’s not easy to study a huge animal that travels thousands of miles through often-treacherous waters, mostly hidden. Poop collection has many things to recommend it as a research technique: its non-invasive to the whales, there’s plenty poo to sample, and the poo often floats. (Fecal plumes can be difficult to spot, so some researchers employ poop detecting dogs to point the way.)

Once whale poop is captured with a net or jar on a stick, it opens a window into the creature’s lives. Fecal analysis can identify individual whales and can tell researchers about their stress state, if they are sexually mature or pregnant, what they are eating and how much, the amount of pollution in their environment, if they have any parasites or diseases, and even things about their genetic makeup.

Whale poop has made possible studies such as a December 2020 report in Conservation Physiology, in which researchers detected elevated stress in a male injured by a propeller or vessel strike, and a 2012 study in which researchers found a drop in stress related hormones with the period immediately after the 9/11 terrorist attacks, likely due to decreased shipping noise.

Whale poop is important not just to scientists, but to the ocean, too. It’s rich in iron, which is an important micronutrient for ocean creatures. Teeny marine plants called phytoplankton eat the iron, tiny shrimp-like krill eat the plants, and whales and fish eat the krill, which in turn produces yet more poop. (Research shows that whales’ miraculous poos support more fish and krill than the whales eat. Scientists discovered this “krill paradox,” in areas where whales were severely hunted: populations of krill, fish, seals, seabirds, and small whales declined even though there were fewer whales to compete with or eat them.)

In addition to being an important part of the food chain, iron-eating phytoplankton also sequester carbon , so more of these tiny plants is a climate positive. Like plants on land, they soak up carbon dioxide, use water and light to free the carbon for energy and for their bodies, and release oxygen as waste (researchers have found that phytoplankton produce at least half the planet’s oxygen). A little iron is needed to make this photosynthesis happen. If the phytoplankton are eaten, the carbon in their bodies is incorporated into the animals that ate them. If not, they fall through the water as “marine snow,” that remains on the ocean floor for hundreds to thousands of years.

Near the coasts, there is plenty iron to sustain the circle: rivers and streams carry iron from dirt and pooping creatures into the ocean. But in the Southern Ocean near ice-covered, creature sparse Antarctica, the water is iron poor. No iron means no plants, no krill, no creatures, and no chomping at climate change. “Iron is essentially a key to unlocking or realizing the potential of this system,” says Savoca.

In short: the more foamy, smelly whale poop on this planet, the better.