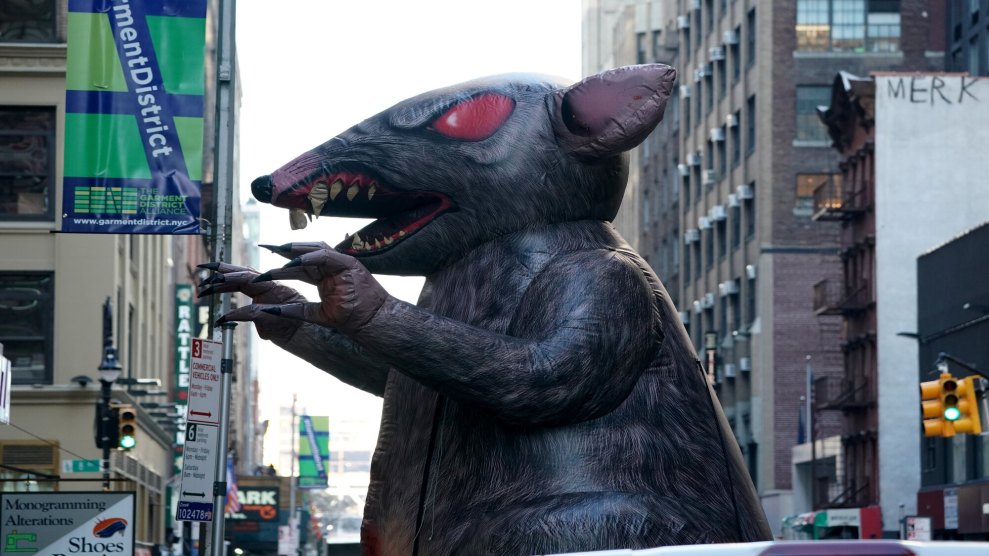 Late last month, New York City posted a job listing for a new “director of rodent mitigation,” a title that was soon slimmed down to “Rat Czar,” to work under the direction of Mayor Eric Adams and his deputy mayor for operations, Meera Joshi.

Taking on New York’s rat population, the listing said, would take someone who is “highly motivated and somewhat bloodthirsty” and possessed of both “stamina and stagecraft.” The new Rat Czar, it added would need a “swashbuckling attitude, crafty humor, and general aura of badassery.”

“Do you have what it takes to do the impossible?” it read. “A virulent vehemence for vermin? A background in urban planning, project management, or government? And most importantly, the drive, determination and killer instinct needed to fight the real enemy—New York City’s relentless rat population?”

The city’s rat population, it has been widely reported, has become something of an obsession for Adams, who marks his first year in office on January 1. Two months ago, he laid out a three-prong plan to fashion a “livable city” out of New York. “Fighting crime, fighting inequality,” he said, “and fighting rats.”

Adam’s rat fixation is notable: According to Gothamist, he’s mentioned “rat” or “rats” more than 80 times during public press conferences since mid-October, signed four rat-focused bills into law that include establishing “rat-mitigation zones,” require trash to be put out at times that limit the opportunity for rats to feast and for buildings to use secure trash containers for two years if they are cited twice for rodents. At the same time, rat complaints have risen 49 percent to 39,000 during 2022.

“I spent $6,800 because every New Yorker knows by now, I hate rats and I’m looking to kill and get rid of rats in the city.”

But it is not Adams who will be declaring victory in New York’s war on rats. It will be his deputy Joshi, whom the coming rat czar will report to. “New York City is like many big cities across the nation coming out of Covid, the number of complaints about rat sightings skyrocketed,” Joshi said “During Covid, when people weren’t occupying public spaces, the rats moved out and started to occupy more of the cityscape.”

In May 2020, several months into the pandemic, the Centers for Disease Control and Prevention warned of “unusual or aggressive” behavior in American rats as a consequence of human lockdowns who had found themselves unable to dine out on a smörgåsbord of restaurant waste and street garbage.

But with human activity returning to near-normal, territorial public-space gains that rats had during Covid are now challenged. “More people are using the parks in New York City, and many cities instituted outdoor dining,” Joshi said.

All of which adds up not necessarily to more rats, but more rat-to-human observations. The city thinks the rat population has increased, but estimates are based on borrow counts and complaints. It’s an inexact science, and one that rat inspectors in rat mitigation zones hope to refine.

The overall rat-to-human ratio is notoriously hard to gauge. A 1949 study determined the ratio was 36 humans to one rat in New York. The estimate was increased to one to one in the 1950s, and then dropped again to four humans to one rat – or about 2 million rats.

“We can’t know for sure because we can’t do a rat census, but all the indications are that there has been an increase,” Joshi says. One of the innovations the city plans to introduce are rat sensors, placed at rat level, that can detect the volume of rat activity.

The rat crackdown comes in tandem with new efforts by the city to reform its garbage collection system. The city recently hired the consulting firm McKinsey & Co to study and design a program for garbage containerization. Part of the problem around that, Joshi says, is that garbage collection efforts are in conflict with New Yorkers who park cars in a dwindling number of parking spots.

Another component is that the city is simply more populous, adding 500,000 people in the past decade, as restaurant food deliveries and associated packaging has swelled. The city generates 375 tons more garbage a day that it did five years ago and diverts less to recycling.

All of which presents a challenge for whoever takes the $120,000 to $170,000-salaried rat killer position. “The rat tsar doesn’t necessarily need to be an exterminator,” Joshi said. “They need to be someone who shows leadership, is highly motivated, and has an open mind.”

But some have expressed disquiet at Adam’s emphasis on rodent annihilation, arguing that the problem is human behavior and the rats are enthusiastic ride-alongs to poor hygiene practices.

Still, Adams is determined. “I hate rats,” he said at a department of sanitation press conference. “And we are going to kill some rats.” Jessica Tisch, the sanitation commissioner, chimed in: “The rats don’t run this city. We do.”

Last week he was back on their case. “I spent $6,800 because every New Yorker knows by now, I hate rats and I’m looking to kill and get rid of rats in the city,” he told a reporter.

Joshi is of the same opinion.