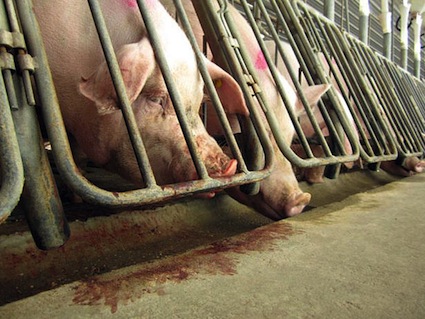 Reservoir hogs: According to peer-reviewed research, factory farms may be a "significant reservoir of resistant bacteria." Yum! Humane Society

Here (PDF) is a document the USDA doesn’t want you to see. It’s what the agency calls a “technical review”—nothing more than a USDA-contracted researcher’s simple, blunt summary of recent academic findings on the growing problem of antibiotic-resistant infections and their link with factory animal farms. The topic is a serious one. A single antibiotic-resistant pathogen, MRSA—just one of many now circulating among Americans—now claims more lives each year than AIDS.

Back in June, the USDA put the review up on its National Agricultural Library website. Soon after, a Dow Jones story quoted a USDA official who declared it to be based on “reputed, scientific, peer-reviewed, and scholarly journals.” She added that the report should not be seen as a “representation of the official position of USDA.” That’s fair enough—the review was designed to sum up the state of science on antibiotic resistance and factory farms, not the USDA’s position on the matter.

But around the same time, the agency added an odd disclaimer to the top of the document: “This review has not been peer reviewed. The views expressed in this publication do not necessarily reflect the views of the United States Department of Agriculture.” And last Friday, the document (original link) vanished without comment from the agency’s website. The only way to see the document now is through the above-linked cached version supplied to me by the Union of Concerned Scientists. [Note, added Sept. 23, 2011: the above link originally went to a cached version, which has since disappeared; so I uploaded a PDF version).

What gives? Why is the USDA suppressing a review that assembles research from “reputed, scientific, peer-reviewed, and scholarly journals”?

To understand the USDA’s quashing of a report it had earlier commissioned, published, and praised, you first have to understand a key aspect of industrial-scale meat production. You see, keeping animals alive and growing fast under cramped, unsanitary conditions is tricky business. One of the industry’s tried-and-true tactics is low-level, daily doses of antibiotics. The practice helps keep infections down, at least in the short term, and, for reasons no one really understands, it pushes animals to fatten to slaughter weight faster.

Altogether, the US meat industry uses 29 million pounds of antibiotics every year. To put that number in perspective, consider that we humans in the United States—in all of our prescription fill-ups and hospital stays combined—use just over 7 million pounds per year. Thus the vast bulk of antibiotics consumed in this country, some 80 percent, goes to factory animal farms.

For years, scientists have worried that the industry’s reliance on antibiotics was contributing to the growing problem of antibiotic resistance. The European Union took action to curtail routine antibiotic use on farms in 2006 (taking Sweden’s lead, which had banned the practice 20 years before).

But here in the United States, the regulatory approach has been completely laissez-faire—and the meat industry would like to keep it that way. The industry claims that even though antibiotic-resistant bacteria have been found both in confined animals and supermarket meat, there’s simply no evidence that livestock strains are jumping to the human population.

Here is where we get back to that now-you-see-it, now-you-don’t USDA research summary, which reads like a heavily footnoted rebuttal to the industry line. Assembled by Vaishali Dharmarha, a research assistant at the University of Maryland, the report summarizes research from 63 academic papers and government studies. Here are few of her findings:

• “Use and misuse of antimicrobial drugs in food animal production and human medicine is the main factor accelerating antimicrobial resistance.”

• “[F]ood animals, when exposed to antimicrobial agents, may serve as a significant reservoir of resistant bacteria that can transmit to humans through the food supply.”

• “Several studies conducted by the Centers for Disease Control and Prevention (CDC) on antimicrobial-resistant Salmonella showed that [antibiotic resistance] in Salmonella strains was most likely due to the antimicrobial use in food animals, and that most infections caused by resistant strains are acquired from the consumption of contaminated food.”

• “Farmers and farm workers may get exposed to resistant bacteria by handling animals, feed, and manure. These exposures are of significant concern to public health, as they can transfer the resistant bacteria to family and community members, particularly through person-to-person contacts.”

• “Resistant bacteria can also spread from intensive food animal production area to outside boundaries through contact between food animals and animals in the external environment. Insects, flies, houseflies, rodents, and wild birds play an important role in this mode of transmission. They are particularly attracted to animal wastes and feed sources from where they carry the resistant bacteria to several locations outside the animal production facility.”

Naturally, such assertions didn’t please the meat industry—and the fact that they were backed up by dozens of peer-reviewed science papers no doubt only sharpened the sting. In the trade paper National Hog Farmer, a National Pork Producers Council official lashed out. Perhaps lacking factual ammunition, the official resorted to an attack on the researchers’ credentials: “We find it very disappointing that a research assistant at a university, who is not an Agricultural Research Service scientist, can develop and post such a review without it going through an agency or peer review process.”

Well, the pork producers can rest a bit easier. The researcher, Dharmarha, has been silenced. Not only has her report been erased from the USDA site, but she has been forbidden to talk to media. I reached her by phone Thursday. She told me that she didn’t know why the report had been taken down, and that she could make no further comment. She referred me to her superior, Tara Smith of the USDA’s National Agriculture Library. Smith has yet to return calls or emails.

But Dharmarha’s report remains available, due to the the miracle of Google search’s cache and the diligence of the Union of Concerned Scientists’ staff, and what it’s telling us is disturbing: In addition to mountains of cheap product, the food industry is churning out a major public-health menace. And instead of informing the public about it, the USDA seems intent to keep it on the down-low. Justin Tatham of the Union of Concerned Scientists, who has been observing the drama since it started in June, put it to me like this: “As a science-based group, we’re concerned about how the USDA is withholding this information from the public.”

For me, what’s even more disturbing is that government regulators know that serious trouble is brewing from antibiotic abuse on factory farms and seem incapable of acting to stop it. Dharmarha’s heresies are not the first time a government-associated person has bluntly held forth on the topic. In 2009, Josh Sharfstein, then deputy commissioner of the FDA, delivered damning testimony before the US House of Representatives. He opined that routine use of antibiotics on farm animals should be severely restricted—banned outright for non-medical uses like growth promotion and used only “under the supervision of a veterinarian” to treat sicknesses.

But by January of this year, Sharfstein had resigned from his post. The FDA maintains its official stance that antibiotics should be used “judiciously” on factory farms, and it leaves it to the industry to define what that means.