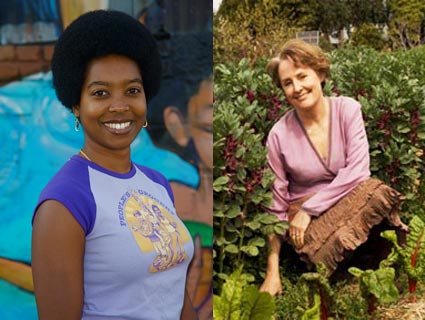 Waters is a white baby boomer who was raised comfortably middle class; Henderson is an African American millennial who grew up with seven foster brothers. Waters runs an iconic white-tablecloth restaurant in well-heeled Berkeley. Henderson runs an iconic anti-poverty nonprofit in low-income West Oakland. Waters speaks most naturally as an aesthete; Henderson, as a community organizer.

The fact that a single movement can contain both demonstrates its great potential—think of the civil rights movement, which really began to coalesce when an alliance along similar race/class lines developed in the late 1950s. But it also indicates crucial fault lines: If the food movement becomes dominated by its white-tablecloth faction, it risks devolving into a high-end tasting club that has little impact on the broader culture.

So when I was invited to interview these two formidable women via Skype recently, I jumped at the chance. The occasion was a class Waters has organized at UC Berkeley this fall called “Edible Education 101,” as part of the 40th-anniversary celebration for Chez Panisse, her temple to local, organic food. Henderson, executive director of People’s Grocery, will be coteaching the course with Berkeley journalism professor Michael Pollan, author of The Omnivore’s Dilemma and other best-selling critiques of the food system. They spoke to me from the Chez Panisse Foundation’s Berkeley offices.

Alice Waters: Aren’t you going to ask me what I had for breakfast?

Mother Jones: We all know you had an Egg McMuffin. We’ll talk about that later! [Laughs.] Let’s start with a hard question. The last time I remember Chez Panisse and People’s Grocery interacting was in 2008, when People’s Grocery’s then-executive director Brahm Ahmadi launched a stinging critique of Slow Food Nation, which Alice organized. He charged that Slow Food threatened to “suck the air” out of the food movement, marginalizing low-income people of color. Now, here the two of you are together. What gives?

Nikki Henderson: Something else that happened at Slow Food Nation is that Van Jones and Alice Waters were on stage together for a panel. And at that point I was working for Van as his aide, and I was the one who kind of prepped him for that panel.

And so something else that I saw there was Oakland and Berkeley coming together. And right after I left Green for All, I went to work for Slow Food USA to try to figure out what the real story was, and fell head over heels in love with the concept of slow food, and didn’t find it at all conflicting with the food justice movement’s principles.

It was just that race and class and power and privilege were not dissected enough to allow these two communities to come together healthfully. And so one of the things about this course is that it’s an exploration over 14 weeks of those class and race and power dynamics.

AW: I think there’s some extraordinary people within Slow Food who really speak to food justice. One of them, of course, is its president Carlo Petrini. Food justice, the right of everyone to eat well, is something just that’s deeply part of Slow Food; it comes from the Italian labor movement. I also think that [Fast Food Nation author] Eric Schlosser, who is one of my heroes, drives [the food justice issue] in a beautiful way. Both will be speaking in Nikki and Michael’s course.

MJ: Let’s hear more about this UC-Berkeley course. How was it conceived?

NH: Chez Panisse asked me to coteach the class with Michael Pollan. Michael was pretty clear—he wanted the drive for the course to come from me and Chez Panisse. So we agreed that it’s our opportunity to take it to the wall. How hard-hitting can we be? How many controversial topics can we come up with? One of the sessions will feature an open conversation with a Walmart executive and also a representative from the the largest corporate bulk-food distributor in the world. There will be a dialogue about what corporate food actually looks like.

We subtitled the course “The Rise and Future of the Food Movement,” because we wanted to locate the concept of edible education within a movement…kind of Oakland activists and Berkeley activists coming together. Because every successful movement in America, and elsewhere, has found ways to get disparate groups of people to actually work together, especially when they’re not in direct conflict with one another.

If the problem [within the sustainable-food movement] is just race and class issues that come from a lot of misunderstanding, that we can handle. Because there are actual enemies out there who are destroying our bodies and our land and whole groups of people, either intentionally or unintentionally.

MJ: Alice, a couple of years ago, you wrote a smart op-ed in the New York Times calling for a significant increase in school lunch funding. But when Congress reauthorized the school food budget last year, the program got a tiny increase. What can school cafeterias do to improve lunches on such a shoestring?

AW: Not very much. I mean, if you have an incredibly energetic, creative, inventive, school lunch director, you can do what [former nutrition director of the Berkeley Unified School District] Ann Cooper did here in Berkeley, which is upgrading. Trying to buy things that are from the farms. She was, I think, fairly successful in that way because of the willingness of all the farmers in this area to participate. It’s a very unusual situation.

We want kids to have an experience that could be really transformational, that really brings them into another relationship to food. And in order to do that, you have to have trained cooks and a circumstance for eating that’s civilized. The only way to really do this, democratically, with social justice in mind, is to feed every child, every day, for free—beginning in kindergarten. That is the way to change the food system, too, because 20 percent of the population is in school.

MJ: You two represent distinct generations in the food movement. What is the most impressive change you’ve observed over the years?

AW: The thing that really amazes me is that in those 40 years, when I first went to France, I just had the most extraordinary food that was based on all the values that I believe in. In just my lifetime, this has changed entirely in France. And in that time, I have a farmer’s market just down the street from Chez Panisse. It’s pretty astonishing the amount of change that can happen in really a very short period of time. I’m very optimistic about that.

NH: What got me thinking about food in the first place was that my great aunt and uncle were amputees due to diabetes. My aunt has diabetes, my grandfather had diabetes and almost had his feet amputated. So for me, eating healthy food is not really a choice—it’s an imperative. I don’t want my family members to die young.

And I think that the way that the mainstream has picked up the food message so deeply that it has infiltrated SNAP [food-stamp] benefits and federally subsidized food programs in the last few years, in particular, has given me hope. There’s a whole sector of society that doesn’t hear what’s going on in the news. They don’t really know what’s going on in mainstream society; they get news when their benefits change. And I feel like the fact that federally subsidized food programs have shifted so radically to include farmers markets and to give bonus points when you get fresh produce, and the fact that you can buy garden supplies with your food stamps, there’s all these things. Those trends give me hope.

MJ: Okay, Alice, please tell us what you had for breakfast.

AW: I’m no baker—you have to be too precise to bake well—but I’ve learned to make this little whole-wheat flat bread. It just has a little olive oil in it, a little salt, and some baking powder. And you knead it together, you just let it sit a while, then roll it out. I put it right on the burner, and it browns and bubbles up just a little bit. I spread it with a hummus I’ve been making with a touch of Indian spice. Eating this little breakfast has really made me very happy.

MJ: What about you, Nikki?

NH: I had an Egg McMuffin. [Laughs.] No, I didn’t. I had a bowl of granola with dried cranberries and soy milk.