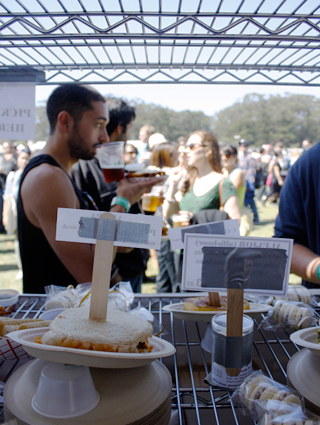 Attendees line up for arepas at the 2011 Outside Lands.Photo: Tim McDonnell

Late Friday morning, in an expansive, fog-shrouded field at San Francisco’s Golden Gate Park, dozens of local food vendors scrambled into ready position. White plumes arose from barbecue smokers and brick pizza ovens. Meats sizzled on the grill and knives chopped down on onions. Chefs shouted orders through the blaring music coming from the stage a hundred yards down. The gates to the park’s annual Outside Lands music festival had opened just minutes before, and hundreds of concertgoers charged through in a hungry stampede.

It would have looked like your typical outdoor food fest, except that there were no corn dogs in sight. Hot dogs, sure, but only the local kind, made from cattle grazing just a few hours north of the city. For the adventurous foodies, though, that state-fair classic paled in comparison to the kimchi-topped tacos, the wood-smoked pork shoulder, or the gruyere-topped free-range burgers.

Now in its fourth year, Outside Lands has made itself known as a one-stop mecca for music, food, and wine lovers alike. It’s one of just a few festivals in the country experimenting with gourmet cuisine at an outdoor event with enough people to fill a medium-sized town. The idea was sparked by a desire to match the food caliber with the all-star music lineup, which in the past has included Beck and Radiohead, and this year features the likes of Phish, Arcade Fire, and OK Go. “It’s really fun to watch how people really see food and wine as main pillars of the music festival,” Kerry Black, who oversees the festival’s marketing and food vendors, told me. “I don’t think anyone has it to the extent that we do.”

The challenge of bringing small, local food operations into a giant music festival—this year its promoters expect a total of 140,000 attendees—is the sheer scale of the endeavor. Demand can be hard to predict. If you low-ball your supply, you risk running dry and turning away customers, but too much food, and you might end up with massive waste.

Larry Bain, cofounder of an outfit called Let’s Be Frank, learned this the hard way. He’s been bringing his local and sustainably grown beef and pork hot dogs to the festival since its inception. The first year, Bain nearly ran out of food. “It was 8 p.m. on a Friday night, and we were hoping it would slow down, but it started picking back up,” he says. “We were running all over town, with three people driving, picking up more onions, ketchups, and hot dogs.”

This year, he took no chances. He started planning two hours into last year’s event, measuring up how much beef he would need and relaying the estimates to his rancher in Sonoma. “She had to adjust her grazing program to ensure that there would be enough cattle ready,” he says. The ranch scaled up the slaughter for three weeks to ensure there would be enough meat prepared and packed for this weekend. On Friday morning, Bain and his staff wheeled in 3,000 hot dogs, 1,500 pork sausages, and 6,000 buns. “We have another 1,000 hot dogs waiting in the warehouse,” he says.

For some chefs, it would be the most food they’d ever prepared in a single week. Allison Arevelo, the co-owner of Homeroom, a mac-n-cheese specialty restaurant in Oakland, closed for lunch the day before so she could finish dicing ingredients. “All our cooks were just preparing all day,” she told me while busily stirring one of four pots on portable stoves. Both the garlic and spicy flavors on the menu were made to order. “Your arms definitely get tired toward the end,” she says. “It’s a lot of stirring.”

For others, the equipment was key. “This is the lovely Porketta,” said Bob Kantor, the founder of Memphis Minnie’s Bar-B-Que, gesturing toward a 5,000-pound meat smoker behind him. Kantor’s crew arrived later than other vendors, hauling in the smoker, but without it they wouldn’t have their signature 18-hour smoked, Texas-style brisket or their 15-hour slow-cooked pork shoulder. “It is real barbecue,” Kantor told me while opening the Porketta’s wood-burning furnace. “It is not what I refer to as faux-cue.”

Of course, no San Francisco music festival would be complete without good wine. Outside Lands features 31 wineries, to be exact, mostly from California, which showed up with 750 cases and 50 kegs. Peter Eastlake, a sommelier who curates the festival’s wine scene, has used the opportunity to break out of the existing wine-tasting conventions. Eastlake says he’s attended many a wine gathering that he felt was one-dimensional. This year’s Wine Lands tent took a full week to build, he says, with each winery showcased behind cherry-wood counters surrounding a central grapevine chandelier over a refurbished canoe doubling as a cooler. “No one ever really paid attention to taking wine beyond its precious little bubble,” Eastlake says. “I’m really bored with that precious little bubble.”