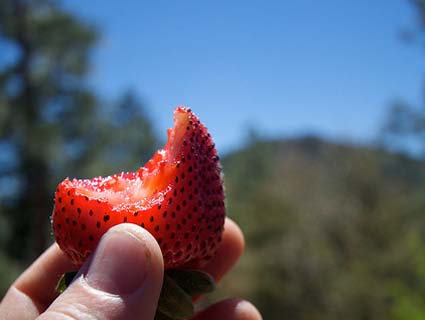 Aesthetics aside, their real scandal is chemical. It takes a lot of pesticides to keep them healthy and growing in vast monocrops, including some of the very most toxic ones available in the US: fumigants that sterilize the soil and imperil farm workers.

For years, I’ve been urging consumers to denounce the use of such poisons by buying only organic strawberries. But it turns out, in California at least, most organic strawberries have a dirty secret: they come from plants that spend time on nurseries that use “millions of pounds of toxic chemicals,” including methyl bromide, before being transplanted to organically managed fields, The New York Times reports.

To be clear, dramatically fewer toxic chemicals are used in the production of organic strawberries, because such poisons are banned in the fields where the fruit is actually grown. But to me and no doubt to many others, the fact that they’re used at all is jarring news.

The Times points to a letter signed by three California organic farmers and the Pesticide Action Network urging the USDA’s National Organic Program to clarify rules around organic seed and plant stock. Organic code stipulates that farmers must use organically produced seeds and plants whenever they are “commercially available,” meaning they can resort to non-organic ones otherwise. Consumers have shown they want an alternative to fumigant-grown strawberries. It’s time for the USDA to step up.

According to the Times, the state doesn’t have a single organic berry nursery—hence the the practice of relying on plants that grew on fumigant-using nurseries.

But here’s the kicker: From 2005 to 2009, the Times reports, the state did have a commercial-scale organic nursery, run by farmer James Rickert of Prather Ranch, one of the letter’s signees. But Rickert’s plant-starting operation languished and went out of business because farmers were wary of paying a premium for organically grown plants that they feared they might carry disease, Rickert told the Times:

“The reality is that a lot of the organic growers want nothing to do with organic plants” because it scares them, said Mr. Rickert, who has since gone back to herding organically fed cattle at his ranch in Butte Valley. Indeed, for many organic strawberry growers, using organic stock amounts to taking a big financial risk with little chance of reward.

The problem was that lax enforcement of the “commercially available” rule, combined with the risk-averse nature of most farmers, allowed most organic farmers to avoid trying Rickert’s products. As the whistle-blowing farmers’ letter to the USDA puts it, “Without clear enforcement we fail to create the marketplace for new technologies, especially alternatives to chemical fumigation.”

If the USDA had enforced the rule in the first place, Rickert’s business would likely have succeeded—and drawn more organic nurseries into the market. And Rickert himself told Pesticide Action Network that he would “jump-start” his nursery business as soon as the USDA shows it’s serious about enforcement.