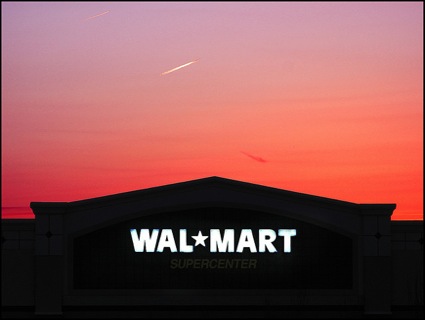 Eighteen years ago, a former professional basketball player named Will Allen made an unlikely career move: He decided to launch a farm in a low-income neighborhood in Milwaukee. His farmhands would be underemployed or unemployed neighborhood teens.

At the time, brutal economic conditions were pushing the nation’s few remaining African American farmers into bankruptcy, and the concept of “urban farming” seemed more like an oxymoron than an answer to the inner city’s economic and public health problems.

Since that time, Allen’s organization, Growing Power, has established itself as a model for how urban resources can be used to grow healthy, affordable food and revitalize neighborhoods at the same time. Growing Power’s model was so successful in Milwaukee that Allen’s daughter Erika has established an offshoot in Chicago.

Meanwhile, while the Allens were honing their community empowerment model of food industry, an Arkansas-based company called Walmart was putting a wholly different vision into practice. Using low-wage labor and its vast market leverage as tools, Walmart emerged as the globe’s largest retailer, grocery merchant, and private employer by draining economic power from communities.

Recently, the two divergent entities intersected in a dramatic announcement: Walmart will donate $1 million to Growing Power. The grant will bolster Growing Power’s efforts to expand its activities from its current bases in Milwaukee and Chicago, to “strengthen 20 community food centers in more than 15 states.”

Naturally, the announcement sent shock waves through the sustainable food movement. Allen—whose long list of accolades includes a MacArthur “genius” grant—took to the Growing Power blog to defend the grant.

Wal-mart is the world’s largest distributor of food—there is no one better positioned to bring high-quality, locally grown food into urban food deserts and fast-food swamps. We can no longer be so idealistic that we hurt the very people we’re trying to help. Keeping groups that have the money and the power to be a significant part of the solution away from the Good Food Revolution will not serve us. At the same time, by accepting grants like these we retain the power for how corporate money is spent, and the grassroots movement stays grassroots.

On Civil Eats, Andy Fisher, cofounder of the Community Food Security Coalition, responded that Walmart’s activities do more to harm low-income communities than can be offset by a $1 million grant. Questioning Allen’s claim that Walmart, which has aggressively sought to move into urban areas and has met fierce opposition, can help solve urban food deserts, Fisher wrote:

The spectre of Walmart moving into urban areas has other supermarket chains running scared, leading them to demand cutbacks in wages and benefits of their unionized workers across America.

And blogger Michele Simon, author of Appetite for Profit, charged that by giving to Growing Power, Walmart is trying to buy support from community empowerment advocates for its effort to move into urban areas: “By partnering with a group that could otherwise be one of its staunchest critics, Walmart is taking a page right out of the Big Tobacco playbook: Buying silence.”

I find myself deeply divided on this issue. The need to build wealth and access to high-quality food and jobs in low-income areas is urgent, and it lacks resources. The federal government, trapped in a spasm of budget cutting, isn’t going to increase such funding anytime soon. Growing Power has always been resourceful and pragmatic, and it has demonstrated it can put large amounts of grant money to good use.

On the other hand, I’m highly skeptical of the idea of Walmart as ally in the effort to use food as a tool of building health and wealth within communities. The company’s business model has always been about profitably selling cheap stuff by maximizing volume and minimizing cost through relentless pressure on suppliers and workers: the sins of the food system writ enormous.

Indeed, as Barry C. Lynn showed in a 2006 Harper’s article, Walmart’s emergence as the dominant player in the US grocery market starting in the 1990s spurred a massive wave of consolidation among the food companies that supply it. And Growing Power doesn’t seem content to merely take the cash and go on about its good work. Allen’s remark about Walmart being well positioned to solve food problems in urban areas suggests that he’s willing to lend his name to Walmart’s effort to expand its presence in places like Chicago against opposition of at least parts of the community.

It’s great that Walmart can spare a million bucks from its annual gross profits of $106 billion to give to a worthy group like Growing Power. It’s how the company makes those profits that gives me pause. I’m traveling this week, but I will be digging more into this story soon.