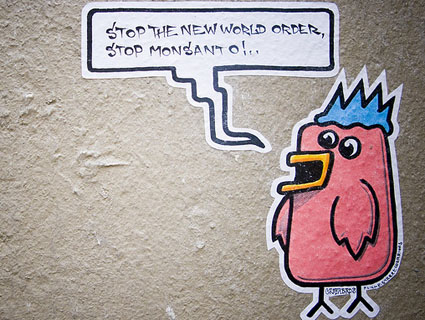 Over in France, a farmer has successfully sued Monsanto for pesticide poisoning. The farmer claims he suffered a raft of neurological troubles after inhaling the agrochemical giant’s Lasso herbicide while cleaning his sprayer in 2004. The court’s ruling against Monsanto “could lend weight to other health claims against pesticides,” according to Reuters.

All very interesting, but what caught my eye was this background bit toward the end of the story:

France, the EU’s largest agricultural producer, is now targeting a 50 percent reduction in pesticide use between 2008 and 2018, with initial results showing a 4 percent cut in farm and non-farm use in 2008-2010.

Wait, France has a national policy in place to slash pesticide use within less than a decade? That’s news to me. So I did a little digging and found that back in 2008, the French government rolled out a plan called Ecophyto 2018 in response to the European Union’s 2006 Sustainable Use Directive, which called for all EU countries to concoct national policies on cutting pesticide use. Ecophyto sets an ambitious agenda for French agriculture: to meet the pesticide-reduction target while maintaining production levels.

The herbicide atrazine turned a male frog female. Is it affecting us too?

And that’s not all. After launching Ecophyto in 2008, the French government amended it in 2009 to add to more lofty goals, according to ENDURE, an EU-funded nonprofit that promotes integrated pest management. It’s now official French policy to to expand certified-organic acreage from 2 percent of the nation’s total farmland in 2009 to 20 percent by 2020; push at least half of the nation’s farms to achieve “high environmental value” certification, which involves reaching certain levels of on-farm biodiversity and reduction in fertilizer use; and to withdraw 40 toxic pesticides from commercial use.

Now, these goals aren’t binding, and I need to dig into just how the French government plans to reach them. But in laying them out, the government creates conditions for agricultural innovation that don’t involve chemicals. French crop breeders, for example, are already selecting for plant varieties that do well amid weed pressure, reducing the need for herbicides. The transnational corporations that dominate US agriculture, by contrast, are fixated on generating seeds that withstand herbicide cocktails.

Indeed, being an American citizen in the early 21st century, I find it stunning that a government would intervene explicitly against the interests of the agrochemical industry. Our once-in-five-years Farm Bill, due for reauthorization this year, gives farmers incentives to produce as much of a few select crops (corn, soy, cotton) as possible, environment be damned. Our USDA, even under Obama, routinely rubber-stamps the latest herbicide marketing schemes cooked up by Monsanto and its few peers. Meanwhile, the USDA patronizes organic agriculture as a marketing niche; it would never occur to US policymakers to push for a dramatic expansion of organics.

In Europe, evidently, they do things differently. The herbicide that allegedly poisoned that French farmer back in 2004, the one that just won him a judgment against Monsanto? Its chemical name is Alachlor; the Pesticide Action Network has it listed as a “bad actor” based on cancer and endocrine-disruption concerns. The European Union banned it in 2007. Monsanto still happily sells it here.