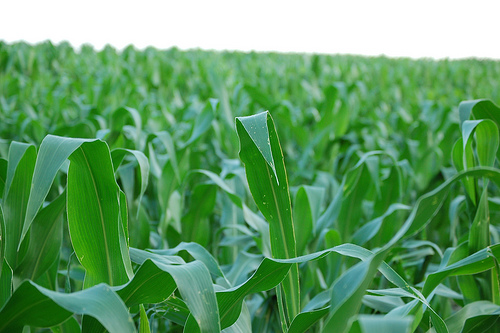 Corn is by far the biggest US crop, and a network of corporations has sprouted up that profits handsomely from it. Companies like Monsanto and Syngenta sell the seeds and chemicals used to grow it, while Cargill, Archer Daniels Midland, Tyson, and their peers buy the finished crop and transform it into meat, ethanol, sweetener, and a range of food ingredients. Known in Washington as King Corn, the corn lobby wields formidable power in political circles.

And the economic pie these companies gorge on is massive. Pesticide Action Network’s Heather Pilatic has an great post about how integrated pest management in US corn fields collapsed with the introduction of Monsanto’s seeds engineered to contain the pesticide Bt and with the rise of Bayer’s neonicotinoid-pesticide seed treatments—representing billions in annual sales to those companies. On the corn-processing side, government mandates ensure that a huge portion of the corn crop—currently, 40 percent—gets diverted into the fuel supply in the form of ethanol, a huge boon to ethanol giant Archer Daniels Midland.

Yet King Corn sits on a rickety throne. That’s the message of a new study (abstract here) by Stanford University and Purdue University researchers on how the nation’s vast annual corn crop will likely fare as the climate warms up over the next 30 years. Short answer: it’s going to be a bumpy ride.

The researchers looked at what would likely happen to corn production if average temperatures rise by 2 degrees Celsius above pre-industrial levels over the next 30 years—the target limit accepted by nations participating in global climate talks. (This is actually a rosy scenario, because at current rates of global greenhouse gas emissions, the temperature rise could be quite a bit higher.)

What they find is that the area known as the corn belt—the upper Midwestern states where most corn is grown—will likely experience periods of extreme heat that will drive down corn production during some years, leading to a series of price spikes. “Severe heat is the big hammer,” one of the study’s authors, Stanford’s Noah Diffenbaugh says in Stanford’s press release. “Even one or two degrees of global warming is likely to substantially increase heat waves that lead to low-yield years and more price volatility.”

Remember 2008, when a spike in global food prices sent millions of people in Latin America, Africa, and Asia into the verge of persistent hunger? The US corn crop, which accounts for 40 percent of global corn production, is a major driver of food prices. The turmoil of 2008 could emerge as the new normal, the study suggests.

The authors stress that the federal policy of mandating that a certain percentage of the nation’s gasoline supply be replaced by corn-derived ethanol will only make the price swings steeper. Currently, federal fuel mandates divert 40 percent of the nation’s corn crop into ethanol—a level that the federal “renewable” fuel standard roughly holds in place until 2022 (which the corn lobby will fight hard to extend). And the mandate remains in place in good harvest years and bad harvest years alike. When a super-hot summer comes along and drives down corn yields, diverting a huge portion of corn to ethanol only exacerbates upward price swings.

Ultimately, they conclude, heat waves and price volatility will likely push the center of the corn belt northward into Canada.

Now, most of the companies that benefit from our agriculture’s corn fixation won’t likely be hurt badly by these trends. Big corn traders like Cargill and ADM know how to profit from volatility, and industrial-scale corn farmers will still be buying plenty of agrichemicals as they try to maximize their corn output amid climate chaos (whether they’re in the United States or in Canada). The meat industry, whose business model thrives on cheap corn, is an exception—high prices and volatility will likely wreak havoc for the likes of Smithfield and Tyson.

But what about the rest of us? It seems insane to throw our lot with an agriculture regime that’s so vulnerable to climate change. What else could we be doing with all of that that prime Midwestern farmland? A paper by researchers from the University of Tennessee and Bard College, published in the journal Climate Management, proposes an answer: Scrap the ethanol mandates and convert a large portion of land now devoted to corn to pasture land for intensively managed beef cows.

The authors note, correctly, that corn-based ethanol delivers little, if any, ecological advantage over petroleum-based gasoline—either in terms of reducing net fossil fuel use or cutting greenhouse gas emissions. And diverting such a huge portion of US corn to ethanol drives up prices not just for corn but also for other crops—not an attractive scenario at a time when high global food prices are pushing millions to the brink of poverty.

The authors create a model in which the US government cancels ethanol mandates, which would basically destroy the corn ethanol market and cause the price of corn to drop. If farmers responded to low corn prices by letting their cropland revert to native prairie and put beef cows on it to graze, they argue, their land would store significant amounts of carbon in soil—more than offsetting cow-related greenhouse gas emissions like methane—thus helping stabilize the climate. Their bottom line:

Results indicate that up to 10 million ha [24.7 million acres, more than a quarter of land currently devoted to corn] about of could be converted to pastureland, reducing agricultural land use emissions by nearly 10 teragrams carbon equivalent per year, a 36% decline in carbon emissions from agricultural land use.

Now, to get those climate benefits, the authors stress, would have to use an emerging technique known as management-intensive grazing, in which cattle are moved regularly from patch of land to patch of land, grazing intensively at each stop while leaving the rest of the pasture to recover at length. This style of grazing, they report—made famous by Virginia farmer Joel Salatin—is much more adept at sequestering carbon in soil than most forms currently used.

Their vision is attractive in a time of rapid climate change—take a quarter of prime corn belt farmland out of its currently chemical-intensive form of agriculture and let it become a carbon sink, one that produces high-quality beef and solid farm income for farmers as a bonus. Since we’d no longer be diverting anywhere close to current levels of corn to ethanol, the decrease in corn acres wouldn’t have much effect on food prices.

Via email, I asked University of Tennessee’s Chad Hellwinckel, one of the study’s coauthors, whether they had worked climate change into their model. Would the higher temperatures modeled by the Stanford researchers affect pastured beef production? He said his paper didn’t work higher temperatures into the model, but added that “perennial grasses tend to withstand drought/flood events more than annual crops” like corn.

But the real flaw in their model, though, is that it neglects the lobbying power of King Corn. Take away the ethanol mandate—or any of the other policy structures in place that give farmers incentives to maximize corn production? From the vantage of 2012, it’s hard to imagine the corn lobby losing that fight anytime soon. As I wrote recently, the farm bill currently inching through Congress will likely dance to the corn lobby’s tune—it could even push farmers to plant yet more corn. As for the rules that keep corn flowing to ethanol, those look set in stone for the foreseeable future.