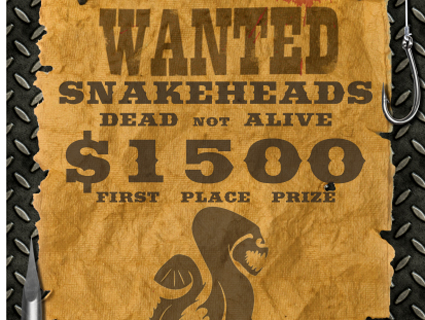 What do you do with a dangerous, invasive fish? Eat it, apparently.

In the DC-Virginia-Maryland region, waterways have been plagued by the snakehead fish, an invasive species here. The fish, native to Asia, has been multiplying in the region since 2002. Snakeheads can measure nearly three feet long, they’re carnivorous, and they have special lung things that allow them to live out of water for a few days and travel over land. They’re pretty terrifying, and scientists are concerned about the impact they might have on the ecosystem in this region.

In Maryland this weekend, fisherfolk are invited out for a snakehead tournament, with the goal of catching as many of the fish as possible. A $1,500 prize goes to the team that catches the heaviest load of fish, and there will also be a prize awarded for the biggest single fish caught. You can fish with a regular old hook and line, or you can hunt them with a bow and arrow, according to the tournament rules.

Though he says he hasn’t seen any major environmental impact at this point, wildlife officials throughout the area are encouraging people to catch the fish. And they are.

John Austin is the director of the Second Annual Snakehead Tournament. Fisherman will start casting their lines, or getting their bows and arrows ready, Saturday night. They’ll fish over night, and through half past noon on Sunday.

“Our goal this year is to remove at least 800 pounds of snakeheads out of the Potomac watershed,” says Austin. “Last year, we removed over 400 pounds, so we’re looking to double that.”

I ate snakehead while I was in Vietnam last month, where it’s a common dish. It’s pretty tasty. I also visited a snakehead farm while there, and watched one of the workers dump a giant bag of chum into the water to feed the hungry beasts, which was a good indication of why they are so dangerous here in a non-native ecosystem.

See our previous coverage of eating invasive pigs and plants, in case you’re thinking of having a feast this weekend.