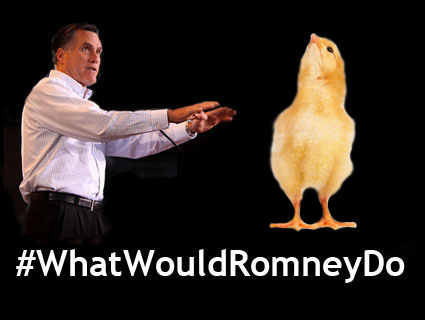 The election-handicapping guru Nate Silver reckons President Obama’s prospects for victory at about 80 percent. Four-to-one odds might sound like a sure thing—but would you think so in a game of Russian roulette? In other words, there is a non-trivial possibility that people will soon be addressing Mitt Romney as “Mr. President.” What would a Romney/Ryan administration likely mean for food and agriculture policy?

1) Regulations, beware. When Obama was running for office in 2008, he promised to crack down on the worst environmental and social abuses of industrial-scale farming. His record, though, has been mixed at best. Under a President Romney, even the pretense of regulating Big Ag is out the window.

The Romney campaign called its October 2012 white paper on ag policy “Agricultural Prosperity: Mitt Romney’s Vision For A Vibrant Rural America.” A more accurate title might have been, “Feeling Over-Regulated? I’ll Fix That.” In it, he promises to “freeze and review new, pending, and proposed agriculture regulations, and eliminate those that are duplicative, ineffective, or not economically justifiable”; to require Congress to “approve all new major regulations proposed by federal agencies, returning responsibility for important decisions to our elected representatives”; and “impose a regulatory cap that forces agencies to spend as much time repealing and streamlining old regulations as they spend advancing new ones.”

Among the regulatory efforts that would likely be blocked under such a regime is the FDA’s tentative, voluntary proposed plan to reduce routine antibiotic use on livestock farms. Tentative and voluntary beats little or nothing, and that’s what Romney is promising on the regulatory front.

2) Lobbyists, step right up. Upon election, President Obama vowed to end the time-honored presidential habit of ushering industry lobbyists through the revolving door and onto regulatory-agency staffs. That’s not a promise he entirely kept—he placed Monsanto-connected people into an important USDA post, the top ag-related job at the US Trade Office, and the top food-safety position within the FDA. But he did better than most recent chief executives at keeping industry paws off the levers of regulatory power.

Under Romney, however, the executive branch’s bureaucracies will likely be a prime habitat for agribusiness shills. Romney has Monsanto ties of his own—in his early days as a Bain consultant, he helped steer what was then a massive industrial-chemical firm into today’s agrichemical/GMO seed behemoth. As for Ryan, his brother Stan is a high executive at agribusiness giant Cargill.

The Romney campaign’s Agriculture Advisory Committee, announced in March, gives us a good whiff of who he’d place in key ag-policy positions. Names include:

• Chuck Conner, a veteran of the Bush II USDA and former president of the Corn Refiners Association, a trade group, dominated by Archer Daniels Midland and Cargill, that exists to promote high-fructose corn syrup and corn ethanol.

3) Know Your Farmer, Know Your Food? No way. In terms of promoting sustainable agriculture, the signal achievement in Obama’s White House is probably the Know Your Farmer, Know Your Food initiative within the USDA. Led by one of Obama’s most progressive appointees, USDA deputy secretary (and longtime organic-farming champion) Kathleen Merrigan, the initiative bunches together and promotes a hodgepodge of progressive-ag programs within the USDA, including ones to invest in cooperatively owned farmers markets, increase fruit and vegetable production for local consumption, encourage recipients of food aid to buy fresh produce at farmers markets, train new farmers, help defray the cost of converting to organic, and fund community-based projects that increase access to healthy food.

The programs represent the crumbs of the farm policy table, funded at pennies on the dollar compared to programs that prop up Big Ag like crop subsidies. But they exist, and before Merrigan showed up in 2009, they were orphans within the USDA, and largely unknown outside of policy-wonk circles. Merrigan has been on a mission to publicize them, to inspire progressive farmers and food-minded community leaders to take advantage of them.

Under Romney, I’m told by people in DC, Know Your Farmer would likely be doomed. They have good reason to think so. Last year, the House—inflamed by the fiscal zealotry of Paul Ryan—passed an amendment to shut down Know Your Farmer. And a member of Romney’s above mentioned ag-advisory team, Sen. Mike Johanns (R-Neb.),  has called for Senate hearings to investigate whether Know Your Farmer is diverting USDA money away from what the senator calls “production agriculture” (by which he meant industrial-scale agriculture).

4) Need food stamps? Dream on. Over at Slate, the agriculture writer Dan Imhoff has teased out the likely fate of food aid—once known as food stamps and now called SNAP—under a Romney-Ryan presidency. First, Imhoff lays out the stakes. The SNAP program is already underfunded, at a time when fully one-sixth of US families rely on it to have enough to eat:

Even with recent increases to daily meal stipends, the SNAP program remains woefully inadequate to the task of helping poor Americans put three meals on their tables, let alone eat a healthy diet. A single person on food stamps receives $6.67 per day; a member of a large family gets $5.

And here’s what Paul Ryan’s budget, endorsed by his running mate, would do:

When deficit hawks looked for big numbers to cut from the agriculture budget earlier this year, food stamps were an easy target. Since 2001, the number of U.S. citizens enrolled in the food stamp program, officially called the Supplemental Nutrition Assistance Program or SNAP, has increased from 17 million to 46 million. The Senate [farm] bill proposed a $4 billion decrease in SNAP benefits over 10 years; the House’s committee [farm] bill called for a $16 billion reduction; Paul Ryan’s budget included $134 billion in cuts to SNAP benefits. [Emphasis added.]

In other words, expect deep cuts in food aid, just when Americans need it most.

5) Want ethanol handouts? By all means! Romney and Ryan are all too happy to impose “tough choices” on families who make too little to keep food on the table. What about the corn ethanol industry, which has fattened itself for decades on tax breaks, and in recent years on hefty mandates on ethanol use from the federal government? Different story.

The Renewable Fuel Standard, passed under Bush II, props up the ethanol industry by stipulating that an ever-growing share of the US car-fuel supply come from ethanol. Currently, about a third of the US corn crop is being burned up in our gas tanks. That means a boon for the corn ethanol industry—two of whose biggest players are Archer Daniels Midland and Cargill—and higher food prices. As I’ve written before, I oppose the ethanol mandates because they boost environmentally damaging corn production and offer no real environmental benefits.

You might expect a campaign associated with Paul Ryan, a free-market zealot, to oppose these mandates as an untoward government intervention into the economy. Instead, the above-mentioned white paper on ag policy promises to “maintain the Renewable Fuel Standard, fulfilling the federal government’s commitment to biofuels growers and refiners and providing them the certainty they need to follow through on their investments in promising technologies.” Right. So the government must scale back the safety net for hungry people, but keep its “commitment to biofuels growers and refiners.”