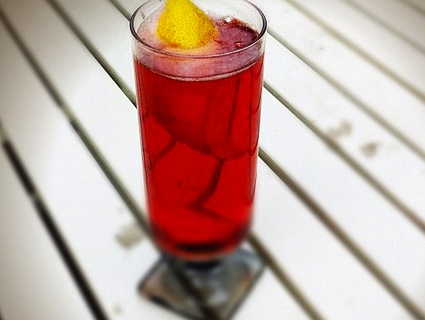 Everyone knows what to drink when the clock strikes midnight on New Year’s Eve: sparkling wine—and ideally, the stuff made in Champagne, France. Like millions of others, I adore Champagne, especially when it’s made on-farm by small producers, as opposed to the heavily marketed prestige brands. Here’s the wonderful wine writer Eric Asimov on these so-called “grower Champagnes,” which, he writes, “suggest soil on the boots and dirt under the fingernails”—distinctive, pronounced flavors over the tarted-up glitz and glamor of, say, Veuve Clicquot. Grower Champagnes also tend to be much cheaper than the prestige brands, but still quite expensive: $40 a bottle on up. To me, they’re a very rare treat.

But what to drink before the midnight hour? I have an idea, and I’m not sure if it’s a good one or a bad one. The case for the Seelbach cocktail—named for the Memphis Louisville, Kentucky, hotel where it was invented in the early 20th century—is that it’s really, really good. You get a citrus bounce from the orange liqueur Cointreau, round sweetness and alcoholic force from bourbon, and festive fizz from sparkly wine, all knit together with a blast of bitters. Yum.

The case against the Seelbach is also that it’s really, really good—and like so many cocktails, very easy drinking. You’ve got to pace yourself on New Years Eve. Too many Seelbachs before midnight bubbly is a great way to turn Champagne into real pain. So enter the world of the Seelbach with moderation—at your own risk.

Note: Classic Seelbach recipes—see here and here—call for proper Champagne as the sparkling wine in the mix. I find the idea of mixing Champagne too decadent to consider, so I use a sturdy, inexpensive Cava or Prosecco. And most recipes call for Peychaud’s bitters along with the more common Angostura type. This may be critical to the authentic flavor of a Seelbach; but both times I’ve made them, I only had Angostura bitters on hand, and I loved the result.

My Version of the Seelbach

Carefully slice the four ribbons of zest off the peel of an orange. Prepare four Champagne flutes by rubbing a ribbon, bottom side down, around the rim, and then fold the ribbon over the rim as a garnish.

In a large pitcher, combine: 6 oz. good, but not great bourbon, like Maker’s Mark or Bulleit; 2 oz. Cointreau; 16 dashes of Angostura bitters (or a little less Angostura, supplemented by some Peychaud’s, if you have it.) Add a good amount of ice, stir well, then strain evenly into the four prepped glasses. Top with sparkling wine.