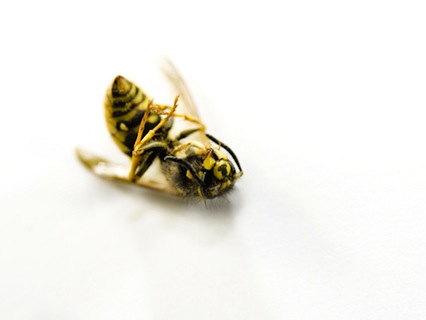 Back in 2010, when I first started writing about the possible link between a ubiquitous class of pesticides called neonicotinoids and declining honeybee health, major media organizations largely ignored the story. Since then, evidence of the link has piled up in peer-reviewed studies—and now the bug killers, marketed by European chemical giants Syngenta and Bayer, are under suspicion for killing birds, too. Finally, big media are taking note. In recent weeks, The New York Times editorial page, NPR’s Dan Charles, and CBS News have all weighed in with reports on the suspect pesticides and their effects on honeybees. Meanwhile, the annual bee die-offs that have come to be known as “colony-collapse disorder” appear to be accelerating.

Where is the Environmental Protection Agency in all of this? Neonics took a famously dodgy path through the agency’s registration process—and a Bayer-funded study purporting to show that the pesticides are harmless to bees, which the EPA had required as a condition for registration, ended up being rejected as bad science by the EPA’s own scientists. Stung, so to speak, by the uproar, the EPA announced in 2011 that it would review the registration of one prominent neonic, Bayer’s clothianidin, “given the concern about clothianidin and other neonicotinoid pesticides and the EPA’s dedication to pollinator protection.”

Neonics are used on a land mass as much as twice as big as California.

Well, given the weight of evidence that has accumulated since 2011 on the pesticides’ harm, can we expect the EPA to ban or at least restrict them anytime soon? No. The agency is sticking to its guns—not in defense of honeybees, but rather in defense of the chemicals that appear to be killing them. Last week, CBS News “checked in” with EPA about its review. The agency’s response: it “should be completed in five years.” Which means at least another half-decade of vast swaths of lands planted with neonic-treated crops.

How much land? Sadly, neither the EPA nor the USDA keeps tabs on pesticide use, so I asked Christian Krupke, an agricultural entomologist at Purdue who has published research implicating neonics in declining bee health, to estimate. His response, via email:

Virtually 100% of corn seed is treated with neonics—that is nearly 100 million acres, add in conservatively 65% of soybeans, all canola, most cotton, most wheat, many smaller acreage crops, and I generally come to a number in the 150-200 million acre range altogether. But it is admittedly not an exact number. In any case, it’s an awful lot of land.

The entire state of California occupies 100 million acres, so we’re talking about a a land mass equivalent to as much as twice the size of the Golden State.