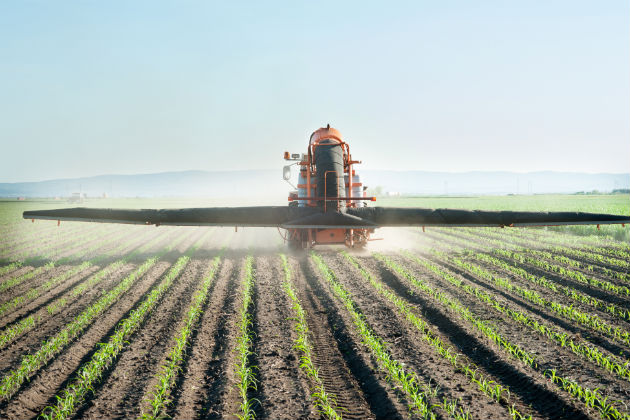 As investigators and rescuers move through a destroyed fertilizer factory in West, Texas, it makes me think about just what nitrogen fertilizer is, and why we use so much of it.

Nitrogen is one of the nutrient elements plants need to grow. Every apple or ear of corn plucked represents nutrients pulled from soil, and for land to remain productive, those nutrients must be replenished. Nitrogen is extremely plentiful—it makes up nearly 80 percent of the air we breathe. But atmospheric nitrogen (N2) is joined together in an extremely tight bond that makes it unusable by plants. Plant-available nitrogen, known as nitrate, is actually scarce, and for most of agriculture’s 10,000-year-old history, the main challenge was figuring out how to cycle usable nitrogen back into the soil. Farmers of yore might not have known the chemistry, but they knew that composting crop waste, animal manure, and even human waste led to better harvests.

But then, to make a long and complicated story short, in the 19th century European scientists figured out the science behind nitrogen’s central role in plant growth, just as the industrial revolution was pushing more people off of farms and into cities. European elites realized that feeding a growing urban population from a shrinking rural labor base would be a problem—and that cheap and easy nitrate would be part of the solution. So the “fixation” of nitrogen—the ability pull it from the air and transform it into something that plants could use—became, well, a fixation. In 1909, a German chemist named Fritz Haber developed a high-temperature, energy-intensive process to synthesize plant-available nitrate from air. And so agriculture’s millennia-old nitrogen-cycling problem was solved. Today’s industrial-scale farms would not be possible without it.

Of course, agriculture wasn’t the only reason Germany and other European countries wanted to generate tons of nitrate. As we just tragically saw in Texas, the stuff can also make a massive explosion. Before it made it onto farm fields in a big way, Haber’s breakthrough fueled the US and European munitions industry, particularly in World War II. In that way, the industrialization of farming shares roots with the industrialization of killing represented by modern war.

Today’s fertilizer plants, reports Vaclav Smil in his seminal book on nitrogen fertilizer, Enriching the Earth, rely on a scaled-up, refined version of the same process developed by Haber.

By the end of World War II, the United States had built 10 large-scale nitrate factories to make bombs. With Europe’s and Japan’s production facilities in ruins, the US entered the postwar period as the undisputed global champion of nitrogen production. The industry quickly shifted from munitions to fertilizer and domestic consumption began to skyrocket, driven, Smil writes, by the rise of new hybrid strains of corn, “the first kind of high-yielding grain cultivar dependent on higher fertilizer applications.” 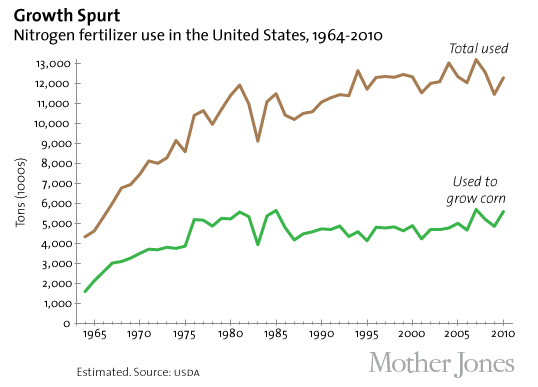 Today, the United States remains a massive nitrogen-fertilizer user; with just 5 percent of the world’s population, we consume about 12 percent of global nitrogen-fertilizer production. And corn—which according to the USDA “requires the most nitrogen per acre” of any crop—remains at the center of our agriculture, covering 30 percent of farmland each year.

While our reliance on cheap nitrogen fertilizer occasionally (though quite rarely) results in attention-grabbing explosions, the real problems are more subtle and long-term. In a recent article, I laid them out:

Industrial agriculture’s reliance on plentiful synthetic nitrogen brings with it a whole bevy of environmental liabilities: excess nitrogen that seeps into streams and eventually into the Mississippi River, feeding a massive annual algae bloom that blots out sea life; emissions of nitrous oxide, a greenhouse gas 300 times more potent than carbon; and the destruction of organic matter in soil.

As I also noted in that article, the US fertilizer industry increasingly relies on cheap natural gas extracted by hydrofracturing, or fracking—the  controversial process of extracting gas from rock formations by bombarding them with water spiked with toxic chemicals. “If Big Ag becomes hooked on cheap fracked gas to meet its fertilizer needs,” I warned, “then the fossil fuel industry will have gained a powerful ally in its effort to steamroll regulation and fight back opposition to fracking projects.”

Our future doesn’t have to be drenched in vast quantities of synthetic nitrogen, with all its liabilities both subtle and spectacular. A 2012 Iowa State University study found that by simply shifting to more diverse crop rotations, Midwestern farmers could radically reduce their reliance on added nitrogen while maintaining current levels of overall food production. Another recent study by Cornell researchers found similar crop rotations also reduced nitrogen runoff.

Yet instead of weaning us from from our huge reliance on nitrogen, federal and state agencies are underwriting the construction of new plants and the expansion of old ones. Meanwhile, federal farm and “renewable fuel” policies continue to prop up corn—in 2013, the USDA expects farmers to plant the most since 1936: 97.3 million acres, covering an area nearly the size of California. We won’t be kicking our nitrogen habit anytime soon.