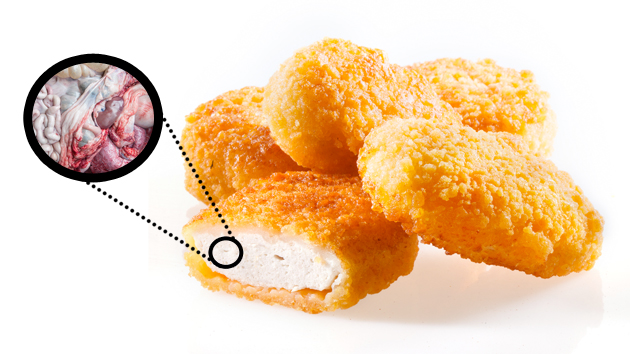 Marketing isn’t about giving people what they want; it’s about convincing people to want what you’ve got—that is, what you can buy cheap, spiff up, and sell at a profit. Take the chicken nugget, that staple of fast-food outlets and school lunches.

The implicit marketing pitch goes something like this: “You like fried chicken, right? How about some bite-sized fried chicken chunks, without the messy bones?” When most people think of eating chicken, they think of, say, biting into a drumstick. What they get when they do so is a mouthful of muscle—popularly known as meat.

What people are actually getting from chicken nuggets is a bit different, according to a new study by University of Mississippi medical researchers. (Abstract here; I have access to the full paper but can’t upload it for copyright reasons.) They bought an order of chicken nuggets from two (unnamed) fast-food chains, plucked a nugget from each, broke them down, and analyzed them in a lab.

One of them contained just 40 percent muscle. The rest? “[G]enerous quantities of fat and other tissue, including connective tissue and bone spicules.” Mmmm, chicken bones.

The other sample had a whopping 50 percent muscle. The remainder consisted “primarily of fat, with some blood vessels and nerve present,” as well as epithelium, the stuff that glands are made of.

Now why would national fast-food chains be mixing bone and fat and whatnot into the chicken meat they grind into nuggets? I doubt anyone ever woke up and thought, “I’m craving some mechanically formed orbs of chicken parts, including meat, but also with plenty of fat, connective tissue, glands, and bone.” Offal is a lot cheaper than meat—the more you can work in, the more profit you can eke out of this popular menu item. Granted, people should eat more offal, as I’ve argued before. But (a) they have a right to know when they’re eating it; (b) one reason people eat chicken meat is because they think it’s lean—cutting it with chicken fat turns such eaters into suckers; and (c) bone matter, really? Bones are great when they’re gently boiled into highly nutritious broths and stocks. That seems like a much more reasonable use for them than hiding them in chicken nuggets.

I like the way the research team, doctors at the University of Mississippi Medical Center in Jackson, described the impetus for their study:

Mississippi leads the nation’s epidemic of obesity, and Jackson, Mississippi, the state capitol, is the epicenter. The metropolitan area, which has just over a half million citizens, boasts 50 different companies offering varying numbers of fast food outlets. Restaurant food restrictions are prohibited by state law. Because chicken nuggets are a favorite of children, and the obesity epidemic now extends to them as well, we thought knowing a bit more about the content of the contemporary chicken nugget could be important.

Of course, their analysis doesn’t necessarily apply to the entire vast world of chicken nuggets—they pulled samples from just two chains. But there’s evidence that some widely marketed nuggets may be quite a bit different from straight chicken meat. Chicken breast meat, for example, delivers about 20 percent of its calories as fat (28 fat calories of a total of 141 calories for a full serving) and brings 27.6 grams of protein per 86 gram serving. In dinosaur-shaped “Fun Nuggets,” a supermarket product made by the meat giant Tyson, fully half of the calories come from fat, serving up just 10 grams of protein in a roughly equal serving.

I contacted Tyson to ask about the composition of Fun Nuggets. A company spokesperson referred me to the National Chicken Council, which issued a statement in response to the Mississippi study. “This study evaluates only two chicken nugget samples out of the billions of chicken nuggets that are made every year,” the statement reads. “It is not scientifically justifiable to make inferences about an entire product category given a sample size of two.” It adds:

In making chicken nuggets, our members use quality ingredients and adhere to all food safety laws and regulations to create a product with high quality their customers and consumers expect. Chicken nuggets are an excellent source of protein, especially for kids who might be picky eaters.

The marketing of Fun Nuggets to kids has taken on a new and interesting form. In a recent sponsored post on a site that accepts “cash advertising, spon­sor­ship, free prod­ucts for review or other forms of com­pen­sa­tion,” blogger Sara W. urged parents to pack their kids’ school lunches with Fun Nuggets. Each bag of the product, Sara W. reports, bears a label that can be clipped and “redeemed for $.24 for your school!” Paging Anna Lappé.