A sign carried by a supporter of Washington's GMO labeling initiative at a recent rally in Seattle. <p><a href="http://www.flickr.com/photos/65421715@N02/6153723552/sizes/z/in/photolist-anMrBW-anKbz6-anMrPb-anKbwK-anMrES-anMrHq-anJCXx-anMZ8Y-anJCZt-anMrAh-anJCRk-anKbyK/" target="_blank">MillionsAgainstMonsanto</a>/flickr</p>

Vote counts go slowly in Washington State, where ballots come in via mail and can be sent in as late as election day. But early returns suggest that—like its predecessor, California’s Prop. 37—Washington’s ballot initiative that would have required labeling of genetically modified food has been snuffed out under a fluffy pillow of cash from the agrichemical and food-processing industries.

As in California, the Washington initiative, known as I-522, polled strongly early and then swan-dived as the election approached amid a flurry of anti-labeling TV ads. Again, the anti forces outspent the pro forces by a wide margin; again, they promoted the trumped-up charge that labeling would dramatically ramp up food prices, which I debunked here. Here’s the money-in-politics group Maplight: 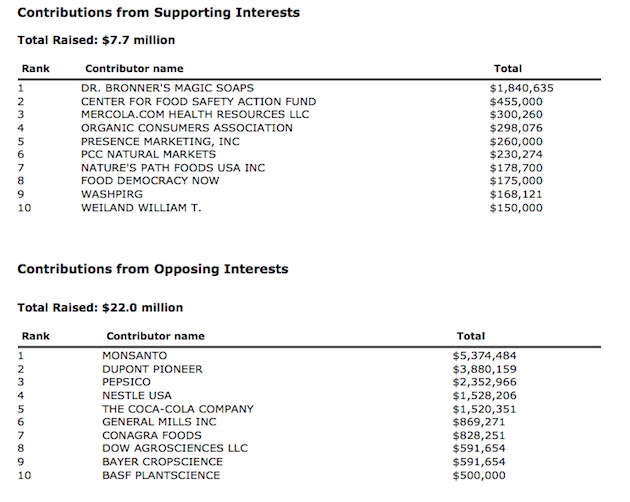 You’ll note from that list that there are two distinct kinds of corporations that dumped cash into the effort to squash labeling in Washington: agrichemical/GMO seed companies (Monsanto, DuPont, Dow, BASF) and Big Food companies (Pepsi, Nestle, Coca Cola, etc.).

The agrichem firms are united in their zealous opposition to labeling. Their products dominate the corn, soybean, sugar beets, and cotton markets, and GMO versions of these crops suffuse the US food system, making up the great bulk of the sweeteners and fats that end up in processed food. They’d obviously prefer to keep that information off of labels, in fear that consumers might demand non-GMO versions of those products.

The Big Food firms, of course, buy those sweeteners and fats and turn them into highly processed foodstuffs. For them, labeling is inconvenient, but not a major threat. After all, they operate quite happily in Europe, where GMO ingredients are rare and labeling is mandatory. Even before the Washington fight, Big Food was ambivalent about continuing to fight labeling, as Tom Laskawy noted in January. Many of these companies have organic brands, and the cash they devoted to defeating labeling in California put them in a tight spot with fans of their organic lines.

They ended up coming out in force to fund the opposition to I-522, but not without making an awkward and ultimately failed attempt to hide their contributions by funneling them through a powerful trade group called the Grocery Manufacturers Association.

In a statement issued Wednesday, the GMA celebrated the likely defeat of labeling in Washington State but left the door open to supporting possible nation-wide labeling that would come from Washington, DC:

Because a 50-state patchwork of GMO labeling laws would be confusing and costly to consumers, GMA will advocate for a federal solution that will protect consumers by ensuring that the FDA, America’s leading food safety authority, sets national standards for the safety and labeling of products made with GMO ingredients.

National labeling? If Big Food does get behind it, it could conceivably happen.