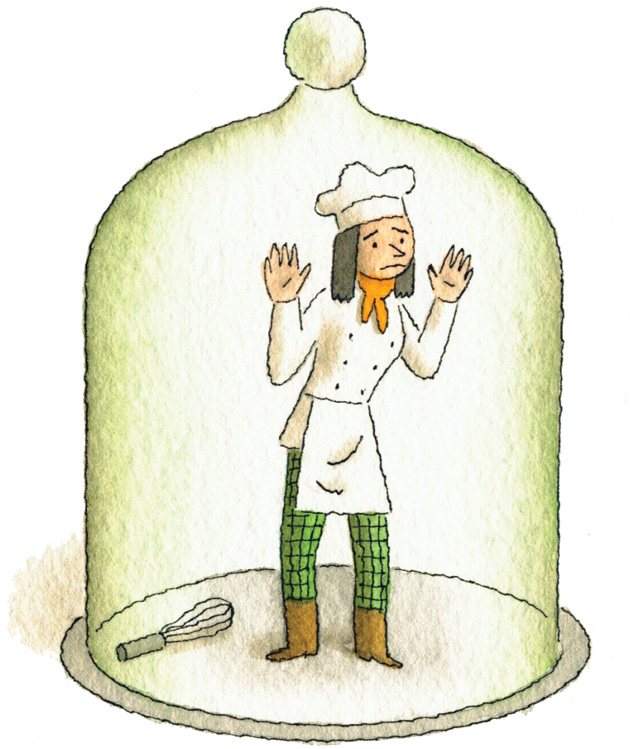 When Time couldn’t think of a single female chef to name to its now-infamous “13 Gods of Food” list, I shared the instant outrage that overtook the internet, but I wasn’t surprised at all.

That’s because the vexed gender politics of culinary prestige—the increasingly glaring fact that women are largely shut of the food world’s top honors—hit me like a sizzling chunk of foie gras to the face in mid-September.

That’s when I got the invitation to a prestigious food conference in Westchester County, New York, sponsored by a group called the Basque Culinary Institute. I have to admit my heart skipped a beat. The star-studded guest list—drawn up by the BCI, International Advisory Council, an influential (and all-male) group of chefs known as the G9—included Spanish legend Ferran Adrià, the surrealist godfather of the postmodern cooking style called molecular gastronomy; Michel Bras, whose eponymous restaurant in southern France has held the food world’s highest ranking, three Michelin stars, since 1999; and René Redzepi, an Adrià acolyte hailed by The New Yorker as “arguably the most famous Dane since Hamlet” for his radically woodsy “New Nordic” fare.

While I savored every minute of the experience—from the mind-blowing conversation (recounted here) to the famed dozen-plus-course tasting menu at the justifiably celebrated Blue Hill at Stone Barns, featuring dishes like eggplant smoked over pork-bone charcoal—one thing left a bitter taste in my mouth: Just 5 of the 29 chefs in attendance were women.

Okay, it’s just a single conference, but such bro-centrism is not unusual in high-minded global chef confabs. MAD, the annual symposium organized by Redzepi in Denmark since 2011, has featured a couple dozen male chefs as speakers—and just two female chefs (see here, here, and here). When the ultra-hipster French restaurant guide Le Fooding threw its 2012 “Brooklyn Fling,” it invited scores of cooks from the trendiest restaurants on both sides of the Atlantic—and again, only two women.

The much-hyped San Pellegrino/ Acqua Panna list of the world’s 50 best restaurants—the industry gold standard—honors only two kitchens led by female chefs (both of them in tandem with men). And just a handful of the world’s 100-plus restaurants with three Michelin stars have a woman at the helm. Ruth Reichl, the former New York Times restaurant critic and Gourmet editor, recalls how, back when the she was part of the California cooking revolution in the 1980s, “we were all convinced that the time of the woman chef was coming.”

So why, 30 years later, does all the high prestige in the food world—like in Fortune 500 corner offices and Ivy League science departments—go to people with penises? Reichl says that sexism and even misogyny remain “very much a part of the culture” in top-end restaurants. Another factor is the kitchen system that, she estimates, more than 90 percent of US restaurants use: the assembly-line French brigade model codified by the chef Auguste Escoffier in the late 19th century.

Andrea Reusing, chef-owner of highly regarded Lantern in Chapel Hill, North Carolina, told me that “there’s nothing inherently anti-woman about the brigade system,” but “if the chef at the top of the hierarchy wants to stop women from advancing,” the system provides a convenient excuse: The girl just couldn’t take the heat. Kerry Diamond, editorial director of the new women-in-cooking magazine Cherry Bombe and co-owner of the small-scale Brooklyn restaurants Seersucker, Nightingale 9, and Smith Canteen, believes that it’s not that women can’t handle testosterone-heavy kitchens—it’s that they don’t want to: It’s boring to watch the same high-powered, macho chefs cook for the same wealthy diners, over and over.

“A lot of the female food entrepreneurs I know are more interested in doing things that are inclusionary, and that have a sense of community behind them,” she says. And that trend may be another factor keeping women from basking in Michelin glory or getting invited to fancy-pants chef confabs. Those honors tend to go to restaurants that cater to the superrich—like Manhattan’s Per Se, where a meal runs about $300 per person (wine not included).

The restaurants Diamond has in mind are ones within reach (albeit as a splurge) for most middle-class diners— like Alice Waters’ pioneering Chez Panisse, where you can savor entrées such as wood-oven braised lamb shoulder for $25. Waters has been the intellectual godmother to a string of successful chefs, including Suzanne Goin of Los Angeles’ Lucques, Judy Rodgers of San Francisco’s Zuni Café, and April Bloomfield of New York City’s The Spotted Pig. Chez Panisse—which, Reichl said, is “almost more of a teaching institution than a restaurant”—never embraced the brigade model; as Waters’ former spokesman, the food writer David Prior, told me, there’s “only one hierarchy: Alice and everyone else.”

Woman-run restaurants that eschew Escoffier’s boot camp approach are now taking root elsewhere. Diamond points to Amanda Cohen, who is “rethinking vegetarian cuisine” at her tiny, wildly inventive Dirt Candy in Manhattan’s East Village. Reichl points to Fish and Game in Hudson, New York, whose wife-and-husband chef team, Jori Emde and Zakary Pelaccio, are “clearly emphasizing training the people who work for them.” So yes, it’s stupid and unfair that the male-chef in-crowd still excludes women. But Diamond thinks that lady chefs are kind of over it. “Everyone acts like those lists and those groups represent the be-all and the end-all,” she says. “But they don’t.”