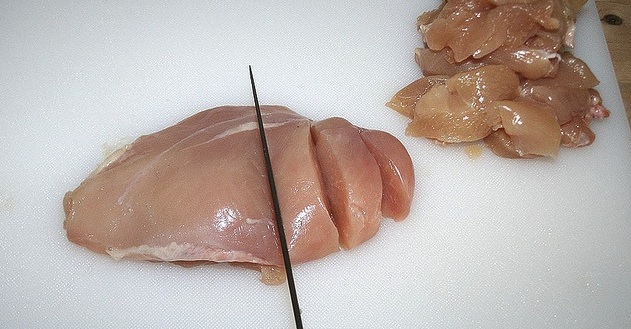 Correction: In the original version of this post, I reported that a Consumer Reports’ study found that chicken labeled organic and no-antibiotic had just as much antibiotic-resistant bacteria as conventional chicken. In fact, Urvashi Rangan, director of consumer safety and sustainability for Consumers Union, which publishes Consumer Reports, has informed me, “We found slightly fewer multidrug-resistant bacteria in the no antibiotics/organic pool compared to conventional. That difference was even greater when we pulled Purdue out of the conventional pool. The issue was really that we didn’t see the bigger difference we expected, not that it was exactly the same.” I’ve corrected the text below.

As a student of the meat industry and its practices, I wasn’t surprised by the recent Consumer Reports finding that nearly half of all the chicken samples it plucked from supermarket shelves nationwide carried “at least one bacterium that was resistant to three or more commonly prescribed antibiotics.” Factory-scale poultry facilities have relied on daily antibiotic doses for decades, contributing to a surge of life-threatening pathogens, and the Food and Drug Administration has only recently taken tentative steps to rein in the practice.

What got me was that chicken samples labeled “organic” or “no antibiotics” (list of all brands tested here) were almost as likely to contain these potentially deadly, drug-defying pathogens.* Notably, organic and antibiotic-free chicken both carry substantial premiums over conventional—at my local H-E-B supermarket in Austin, organic boneless chicken breast is fetching $7.97 per pound—vs. $4.99 for no-antibiotic and $1.97 for regular.

My surprise wasn’t based on some romantic notion that organic food is cleaner. Bacteria develop the ability to withstand antibiotics by being exposed to them regularly. US Department of Agriculture code forbids antibiotics in organic meat production, and the “no antibiotics” label means just that, and is also regulated by the USDA.

And there are recent peer-reviewed studies showing that, on actual farms, antibiotic-resistant strains are much less common in organic facilities than in conventional. In this 2011 paper, University of Maryland, Johns Hopkins University, and Penn State University researchers compared 10 conventional poultry houses with 10 that had recently gone organic. They found that both types of houses were full of a bacteria called Enterococcus—but that the strains were between four and five times more likely to be “multidrug resistant” (able to survive three or more antibiotics) in the conventional facilities. A 2010 paper by University of Georgia, Ohio State University, and North Carolina State University researchers found similar results.

So if resistant strains appear to develop much less frequently on organically managed chicken farms, why do they show up at the similar rates in organic chicken on the supermarket shelf? Urvashi Rangan, director of consumer safety and sustainability for Consumers Union, which publishes Consumer Reports, says no clear explanation has emerged. “If you don’t use the agent that is accelerating resistance, then you will create less resistance,” she said. Other factors must be coming into play, she said. One possibility is cross-contamination at the slaughterhouse—often the same facility will process conventional and organic birds alike.

To get the USDA label, chickens need to be raised under organic rules only from the “second day of life” (PDF)—meaning that they can and commonly do receive antibiotics while at the hatchery.

Another possible factor is the one antibiotic loophole in organic poultry production: To get the USDA label, chickens need to be raised under organic rules only from the “second day of life” (PDF)—meaning that they can and commonly do receive antibiotics while at the hatchery. So it’s possible that nonorganic chicks could grow into organic chickens with plenty of antibiotic-resistant bacteria strains on their meat at the supermarket.

But that, of course, wouldn’t explain why researchers have not found an abundance of antibiotic resistance on organic chicken farms—if the chicks came on to the farms with antibiotic-resistant material, presumably it would show up in the on-farm studies. And what’s more, chicken labeled “no antibiotics” doesn’t enjoy the same hatchery loophole—the USDA requires that it come from birds never exposed to antibiotics, even in the egg. Yet in the Consumer Reports study, “no antibiotics” chicken (like organic)  tended to carry nearly as many resistant strains as organic and conventional.*

Rangan told me that her organization plans to drill down and look at more stages of the production process to figure out why antibiotic-resistant strains are appearing at higher-than-expected rates on chicken raised without antibiotics. In the meantime, consumers should treat all chicken they buy with great care, washing their hands thoroughly after handling it raw, cleaning all surfaces it contacts immediately, and cooking it completely.

But while the industry repeats such warnings as if they were largely sufficient to protect public health, clearly they’re not. It’s one thing to risk coming down with a chicken-borne bug that antibiotics can cure if it gets out of hand. It’s another thing when the bug raises the specter of what the CDC calls “treatment failure”—i.e, death.

Home cooks get distracted—say, getting a phone call or text message after cutting chicken and forgetting to wash the knife before slicing an apple for a snack. And even professionals have a tough time handling chicken as essentially hazardous material. A Centers for Disease Control and Prevention study last year found that 40 percent of restaurant managers “never, rarely, or only sometimes” use separate cutting boards for raw meat—including chicken—meaning that the same surface could come into contact with raw chicken and, say, vegetables for a raw salad. A 2005 survey from the Environmental Health Specialists Network found that nearly a quarter of workers don’t wash their hands after handling raw meat. (My colleague Dana Liebelson has more on a trove of recent CDC survey data on this important and appetite-killing topic.)

And remember last fall’s outbreak involving a particularly virulent strain of multidrug-resistant salmonella-laced chicken? It affected even rotisserie chicken from a Costco store in California. How does well-cooked chicken get infected with a nasty salmonella superbug? The USDA reported at the time that “it appears that the problem may be the result of cross-contamination after the cooking process in the preparation area.”

No wonder that when the CDC analyzed US outbreak data from 1998 to 2008, it found that “more deaths were attributed to poultry than to any other commodity.”