US obesity and diabetes rates are among the globe’s very highest. Why? On her blog, the NYU nutritionist and food-politics expert Marion Nestle recently pointed (hat-tip, RealFood.org) to this telling chart on how we spend our grocery money, from the USDA’s Amber Waves publication: 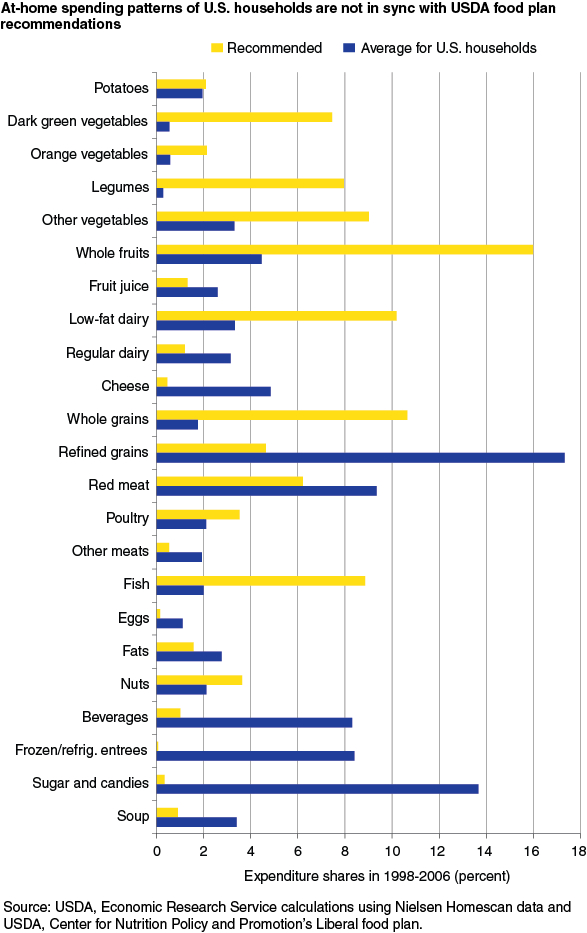 So, we do a pretty good job eating enough potatoes. But the healthier, more brightly colored vegetables like kale and carrots, no so much. We spend four times the amount on refined grains the USDA thinks is proper, and about a fifth of the target expenditure in whole grains. We spend nearly 14 percent of our at-home food budgets on sugar and candies, and another 8 percent on premade frozen and fridge entrees. Whole fruit barley accounts for less than 5 percent of our grocery bill. And so on—a pretty dismal picture.

That chart deals with at-home expenditures. What about our food choices out in the world? The USDA article has more. This chart shows that we’re getting more and more of our sustenance outside of our own kitchens: 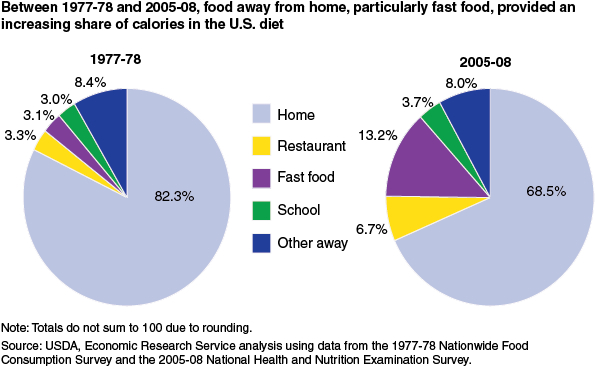 And while the article doesn’t offer comparable data to the above at-home chart about expenditures outside the home, it does deliver evidence that our eating out habits are pretty dire as well: 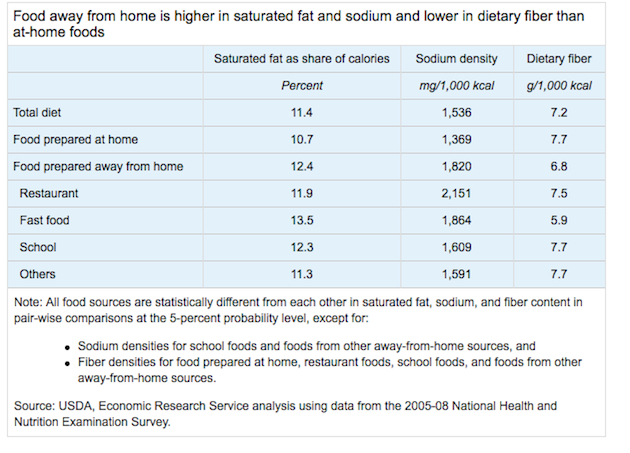 Why do we eat such crap food? The USDA throws up its hands: “Despite the benefits to overall diet quality,” the report states, “it can be difficult to convince consumers to change food preferences.”

But it never pauses top consider the food industry’s vast marketing budget. According to Yale’s Rudd Center, the US fast-food chains like McDonalds, Wendy’s, and Burger King spent $4.6 billion on advertising in 2012. “For context,” Rudd reports, “the biggest advertiser, McDonald’s, spent 2.7 times as much to advertise its products ($972 million) as all fruit, vegetable, bottled water, and milk advertisers combined ($367 million).” I can’t find numbers for the marketing budgets for the gigantic food companies that stock the middle shelves of supermarkets; but according to Advertising Age, Kraft alone spent $683 million on US advertising in 2012.

By contrast, Center for Nutrition Policy and Promotion, the USDA’s sub-agency that “works to improve the health and well-being of Americans by developing and promoting dietary guidance that links scientific research to the nutrition needs of consumers,” had a proposed budget of $8.7 million in 2013.