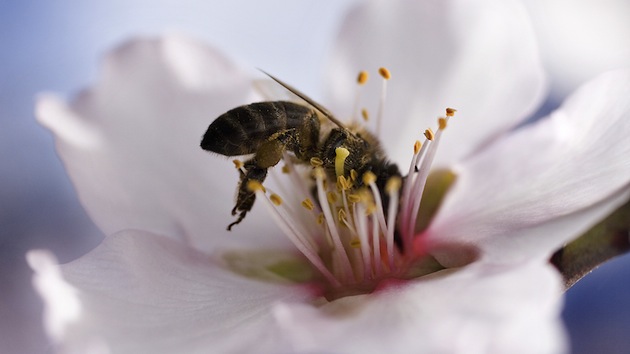 Growing 80 percent of the globe’s almonds in California doesn’t just require massive amounts of water. It also takes a whole bunch of honeybees for pollination—roughly two hives’ worth for every acre of almonds trees, around 1.7 million hives altogether. That’s something like 85 percent of all available commercial hives in the United States, Gene Brandi, a California beekeeper who serves as vice president of the American Beekeeping Federation, recently told NPR.

Now, that vast army of bees—made up, all told, of more than 80 billion flying, buzzing soldiers—doesn’t stay put in California’s almond-happy Central Valley all year. The almond bloom typically lasts for just a few weeks (or less) in February. The modern honeybee operation is an itinerant business—beekeepers move hives throughout the year, in pursuit of paid pollination gigs—from tangerines in Florida to cherries in Washington state—as well as good forage for honey.

As US honeybees’ health has flagged, California’s almond industry has been drawing in a larger and and larger portion of the nation’s available bee hives.

But California’s almond bloom is the biggest gig of all—the “largest managed pollination event anywhere in the world,” Scientific American reports. And as US honeybee populations’ health has flagged in recent years—most famously epitomized by the mysterious winter die-offs that began around a decade ago, known as colony collapse disorder—the almond industry has been drawing in a larger and and larger portion of the nation’s available bee hives.

One question that arises is: Why do the nation’s beekeepers uproot themselves and their winged charges to travel to California each year? The state houses about 500,000 beehives, meaning that more then 1 million come in, from as far away as Maine. What’s the incentive?

These days, US beekeepers typically make more money from renting out their bees for pollination than they do from producing honey. “Without pollination income, we’d be out of business,” Brandi told me. Income from the two sources varies year to year, but pollination income has grown over the years even as honey revenues have fallen, depressed by competition from imported honey. In 2012, for example, US beekeepers brought in $283 million from honey, versus an estimated $656 million from pollination.

And California’s almond growers have to shell out big money to draw in their pollinators—between $165 and $200 per hive, vs $45 to $75 a hive a decade ago, according to the Fresno Bee. That’s around $309 million, if we assume as average price of $182 per hive, the midpoint of the Bee‘s range.

What’s the impact on overall honeybee health, which has been under heavy pressure over the past decade? There are two potential downsides.

The first is from pesticides—insect growth regulators and fungicides—bees encounter in their travels around almond groves. During the 2014 California almond bloom, between 15 percent and 25 percent of beehives suffered “severe” damage, ranging from complete hive collapse to dead and deformed brood (the next generation of bees incubating in the hive), the Pollinator Stewardship Council estimated. The die-off caused an uproar, and many beekeepers pointed a finger at pesticides—and they probably had a point, as I showed here.

During the 2014 California almond bloom, between 15 and 25 percent of hives suffered severe damage.

This year, Brandi told me, some beekeepers reported losses, but they weren’t nearly as severe or widespread as the ones in 2014. In the wake of the 2014 troubles, the Almond Board of California released a set of “best management practices” for protecting honeybees during the bloom that, Brandi said, may have influenced growers to avoid particularly harmful pesticide applications. Given that almond growers utterly rely on—and indeed, pay heavily for—honeybees for pollinating their crop, it seems logical that they’ll avoid poisoning them when possible. There will also be tension, though, as long as almond trees are planted in geographically concentrated and vast groves. Large monocrops provide an ideal habitat for pests like fungi and insects, and thus a strong incentive to respond with chemicals. There’s also the possibility that concentrating such a huge portion of the nation’s bees in such a tight geographical area facilitates the spread of viruses and other pathogens.

The second threat to bee health from pollinating California’s massive almond bloom comes from long-distance travel. This one lies at the heart of the beekeeping industry’s itinerant business model. Does it compromise bee health to pack hundreds of hives onto a flatbed truck for cross-country trips? The stresses go well beyond the occasional truck wreck. Scientific American explains the rigors of apiary highway travel like this:

The migration…continually boomerangs honeybees between times of plenty and borderline starvation. Once a particular bloom is over, the bees have nothing to eat, because there is only that one pollen-depleted crop as far as the eye can see. When on the road, bees cannot forage or defecate. And the sugar syrup and pollen patties beekeepers offer as compensation are not nearly as nutritious as pollen and nectar from wild plants. Scientists have a good understanding of the macronutrients in pollen such as protein, fat and carbohydrate, but know very little about its many micronutrients such as vitamins, metals and minerals—so replicating pollen is difficult.

A 2012 paper, coauthored by USDA bee researcher Jeff Pettis, found that long-distance travel may indeed have ill health effects—the researchers found that “bees experiencing transportation have trouble fully developing their food glands and this might affect their ability to nurse the next generation of workers.”

Brandi, for his part, dismisses travel as a factor in the overall decline in bee health. “Bees have been traveling back and forth across he country for years,” he said—since long before the colony collapse disorder and other health troubles began to emerge a decade ago, he said. He said bee travel has actually gotten less stressful over the years as beekeepers have upgraded to smoother-riding flatbed trucks. He said other factors, including pesticides, declining biodiversity, and mites (a bee pest) are likely more important drivers of declining bee health.

Meanwhile, California almond country’s massive appetite for pollination isn’t likely to dissipate anytime soon. According to the latest USDA numbers, acreage devoted to almonds expanded by 5 percent in 2014, and growers continue laying in yet more groves this year, Western Farm Press reports. Land devoted to almonds has grown 50 percent since 2005—and every time farmers add another acre of trees, they need access to two additional bee hives for pollination.

So why don’t more beekeepers simply move to California and stay put, to take advantage of the world’s biggest—and growing—pollination gig? I put that question to longtime bee expert Eric Mussen of the University of California-Davis. He said the state is already home to 500,000 of the nation’s 2.7 million hives. The almond bloom is great for a few weeks, but in terms of year-round foraging, “California is already at or near its carrying capacity for honeybees,” he said—the areas with the best-quality forage are already well stocked with bees.So satisfying the world’s ever-growing appetite for almonds will continue to require an annual armada of beehive-laden trucks.