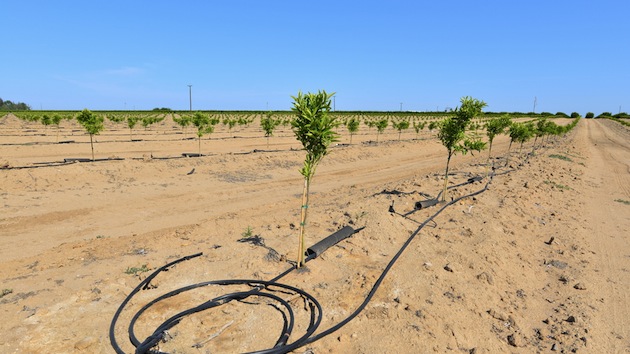 I’m being facetious. Water scarcity, obviously, is the specter haunting California agriculture. But Ross didn’t go there. Instead, she defended her state’s farms against charges by media pundits of irrigation profligacy, asserting that the farms are “worth” the 80 percent of the state’s managed water that they require.

Farmers in the Central Valley are locked in a virtual water-drilling arms race.

The piece, co-written with University of California-Davis ag economist Daniel Sumner, surely doesn’t express the entirety of Ross’ view of her state’s sobering water situation. But its focus on public-image concerns over substance suggests an inability by the state’s policymakers to accept that the state’s farming-related water issues are so severe that they need a policy response—now.

A couple of days after Ross’ piece, the New York Times ran an eye-popping article about farmer-on-farmer water wars brewing in the ag-centered Central Valley. Farmers, the Times explains, are tapping into groundwater at such a rapid rate that some wells are going dry, forcing farmers to dig deeper: a virtual water-drilling arms race. Worse, large swaths of the southern Central Valley are sinking into the void left by extracted water. And as land drops, any infrastructure built onto it—roads, bridges, irrigation canals—is prone to damage.

As the Center for Investigative Reporting’s Nathan Halverson showed in a recent article, subsidence, as land sinking is known, is already costing the state’s taxpayers tens of millions of dollars in the form of roads, bridges, and schools that need fixing. Halverson shows that the California Department of Transportation is spending taxpayer money to fix roads without knowing that agriculture-driven subsidence is causing the problems. Sunken land also does permanent damage to the aquifers themselves, reducing their capacity to hold water in the future.

The new groundwater rules won’t go fully into effect until 2040.

Predictably, the situation is leading to disputes among farmers over damaged canals and dry wells, The Times shows. But amid the squabbling, no one has the incentive to stop pumping water—why should farmer A sacrifice income by turning off the well, if she knows that farmers B, C, and D are simply going to keep pumping, driving water tables ever lower.

And as I’ve written before, the ongoing switch from annual crops like cotton and vegetables to almond and pistachio orchards only makes things more intense. It’s one thing to fallow melons and lose just a year’s income; almond and pistachio groves are major investments that take several years to begin producing, and then do so for 20 years, so farmers fight hard to keep them watered every year.

With economic incentives in place for a massive water grab, it’s time for policymakers to step in. Last year, they did—sort of. The California legislature shook off decades of pushback from farm interests and passed historic legislation that finally regulated groundwater pumping. Until then, groundwater had been governed by Wild West rules: If there’s water under your land, you can tap it at will (even though aquifers don’t follow land-title boundaries).

The problem, though, is that the legislation doesn’t go fully into effect until 2040—and until then will remain under a cloak of confidentiality, meaning it will still be difficult to tell where groundwater is being pumped the fastest. In other words, the legislature punted any actual solution to the problem a couple more decades down the road.

That’s inadequate, according to Jay Famiglietti, senior water scientist at the NASA Jet Propulsion Laboratory, and he should know: He uses satellite data to assess groundwater withdrawals. In a March LA Times op-ed, he argued that implementation needs to be accelerated. If it’s not, he wrote, “it will be nearly 30 years before we even know what is working…By then, there may be no groundwater left to sustain.”

And here’s where Karen Ross and her bully pulpit could help things. Rather than penning anodyne op-eds defending farmers’ water use from public criticism, she should be helping Central Valley farmers pull out of their groundwater death spiral by pushing for emergency measures to rein in groundwater pumping. “Our soils and climate are what have made it possible for us to supply so much of our nation’s and the world’s food,” Ross reminded us in her op-ed. She forgot to mention the rapidly depleting fossil resource that props up the Central Valley ag powerhouse—both literally and figuratively.