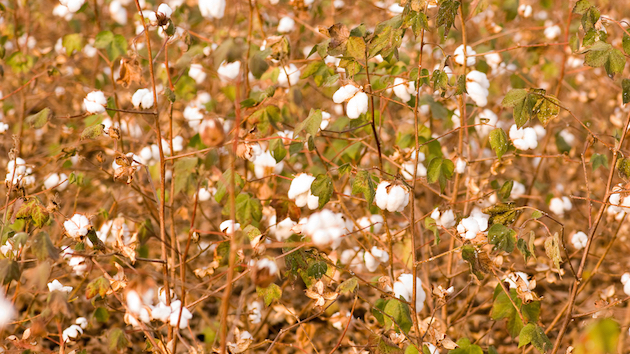 An Indian cotton field, ready for the harvest <a href="http://www.shutterstock.com/pic-252822628/stock-photo-cotton-field-white-with-ripe-cotton-ready-for-harvesting-maharashtra-india.html?src=RpR8w27KCfpvsJOByCiR5A-1-7">Tukaram Karve</a>/Shutterstock

Since the mid-1990s, around 300,000 Indian farmers have killed themselves—a rate of about one every 30 minutes, which is 47 percent higher than the national average. The tragedy has become entangled in the rhetorical war around genetically modified seeds.

Some anti-GMO activists, including Indian scientist and organic-farming champion Vandana Shiva, have blamed the high suicide rates directly on biotech seeds—specifically, cotton tweaked by Monsanto to contain the Bt pesticide, now used on more than 90 percent of India’s cotton acreage. Shiva has gone so far as to declare them “seeds of suicide,” because, she claims, “suicides increased after Bt cotton was introduced.”

GMO enthusiasts, by contrast, counter that Monsanto’s patented seeds are a boon to India’s cotton farmers: They’ve boosted crop yields, driven down pesticide use, and alleviated rural poverty, a 2010 paper by the pro-industry International Service for the Acquisition of Agri-biotech Applications (ISAAA) argued.

So which is it? According to a recent peer-reviewed paper from a team led by Andrew Gutierrez, a professor emeritus at the University of California-Berkeley’s department of environmental policy, science, and management, the situation is way too complicated to be aptly described by sound bites in a rhetorical war.

For their analysis, the team looked closely at yields, pesticide use, farmer incomes, and suicide rates in India’s cotton regions, both before and after the debut of Bt seeds in 2002.

They found that on large farms with access to irrigation water, genetically modified cotton makes economic sense—paying up for the more expensive seeds helps control a voracious pest called the pink bollworm in a cost-effective way.

But 65 percent of India’s cotton crop comes from farmers who rely on rain, not irrigation pumps. For them, the situation is the opposite—reliance on pesticides and the higher cost of the seeds increase the risk of bankruptcy and thus suicide, the study finds. The smaller and more Bt-reliant the farm in these rain-fed cotton areas, the authors found, the higher the suicide rate. (An analysis that largely jibes with Shiva’s, apart from her heated rhetoric.)

Even so, the paper does not present Bt cotton as the trigger for India’s farmer-suicide crisis. Rather, it provides crucial background for understanding how India’s shift to industrial farming techniques starting in the 1960s left the majority of the nation’s cotton farmers increasingly reliant on loans to purchase pricey fertilizers, pesticides, and hybrid seeds, and eventually GM seeds, making them vulnerable to bankruptcy when the vagaries of rain and global cotton markets turned against them.

The authors note that cotton has been cultivated in India for 5,000 years, and until the emergence of the slavery-dependent cotton empire in the southern United States in the early 1800s, “India was the center of world cotton innovation.” In the 1970s, Indian cotton farmers turned to hybrid seeds that delivered higher yields as long as they were doused with sufficient fertilizer. Until then, the pink bollworm—the pest now targeted by Bt seeds—”was not a major pest in Indian cotton,” they write. But higher-yielding plants draw more insect pests, and so the new hybrid seeds also triggered an increasing reliance on insecticides. Bollworms evolved to resist the chemical onslaught and many of their natural predators (other insects) saw their populations decline, giving the bollworms a niche. Hence when Monsanto’s bollworm-targeting Bt seeds hit the market in the early 2000s, they were essentially an industrial-ag solution to a problem that had been caused by industrial agriculture.

As an alternative to Bt seeds, the paper shows, small-scale farmers can successfully plant varieties of cotton that ripen quickly, before bollworm populations emerge. As for the irrigated cotton farms that are now successfully using the Bt trait, the authors note that India’s large farms, like many of California’s, are tapping underground water that’s “unregulated and unpriced,” at rates much higher than natural recharge. They’re courting a problem that may make the feared bollworm look tame by comparison: “the impending collapse of ground water levels for irrigated cotton.”