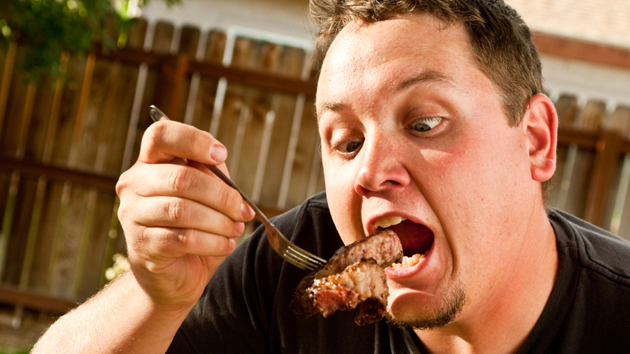 A lot of people do things they regret when they are drunk. Maybe it’s getting tanked and then incoherently divulging secret feelings for a colleague. Perhaps it’s the slurred, eyes-shut karaoke rendition of Whitney Houston’s “I Will Always Love You.” Or it could be that after being sucked into an alcohol-fueled gluttonous rampage, the favorite option is diving face first into a meaty meal—even if you happen to be a socially conscious vegetarian.

According to a new study conducted by VoucherCodesPro.com, a discount code company based in the United Kingdom, more than one-third of vegetarians have become nonvegetarians after a night of drinking. When Drunk Hungry hits, they are quick to ditch their diets—and convictions.

And, these drunken, carnivorous vegetarians aren’t even honest about falling off the wagon. Close to 70 percent have kept their boozy burger-eating a secret. The next morning they go right back to pretending to be full-time vegetarians—at least until the next happy hour.

While most respondents did say they stand by their vegetarian principles even when they are crocked, George Charles, the founder of VoucherCodesPro, told the Morning Advertiser he was surprised by the results. He emphasized that people should offer more support for their drunken vegetarian buddies in times of temptation: “I think it’s important,” he says, “for friends of these vegetarians to support them when drunk and urge them not to eat meat, as I’m sure they regret it the next day!”

Friends don’t ever let friends go on drunken meat binges they will regret.