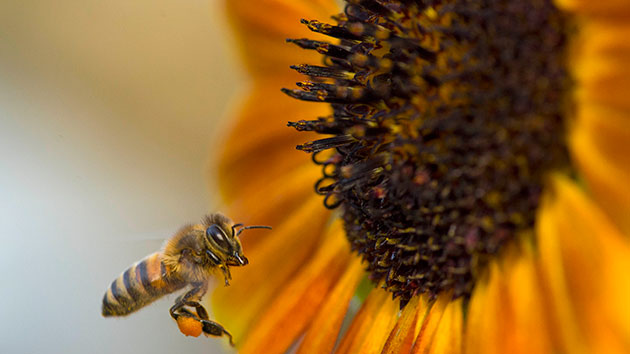 In 2011, agrichemical giants Monsanto and Bayer CropScience joined forces to sell soybean seeds coated with (among other things) an insecticide of the neonicotinoid family. Neonics are so-called systematic pesticides—when the coated seeds sprout and grow, the resulting plants take up the bug-killing chemical, making them poisonous to crop-chomping pests like aphids. Monsanto rivals Syngenta and DuPont also market neonic-treated soybean seeds.

These products—buoyed by claims that the chemical protects soybean crops from early-season insect pests—have enjoyed great success in the marketplace. Soybeans are the second-most-planted US crop, covering about a quarter of US farmland—and at least a third of US soybean acres are grown with neonic-treated seeds. But two problems haunt this highly lucrative market: 1) The neonic soybean seeds might not do much at all to fight off pests, and 2) they appear to be harming bees and may also hurt other pollinators, birds, butterflies, and water-borne invertebrates.

Doubts about neonic-treated soybean seeds’ effectiveness aren’t new. In 2014, the Environmental Protection Agency released a blunt preliminary report finding that “neonicotinoid seed treatments likely provide $0 in benefits” to soybean growers. But the agrichemical industry likes to portray the EPA as an overzealous regulator that relies on questionable data, and it quickly issued a report vigorously disagreeing with the EPA’s assessment.

“Independent research demonstrates that neonicotinoid seed treatments [for soybeans] do not provide a consistent return on investment.”

The reason is that neonic-treated soybeans wield the great bulk of their bug-killing power for the first three weeks after the seeds sprout; the major pest that attacks soybean plants, the aphid, doesn’t arrive until much later, when the soybean plants are full-grown. “In other words,” the report states, aphid populations “increase to threshold levels weeks after the short window that neonicotinoid seed treatments protect plants.”

And not only are neonics useless against soybeans’ major field pest, aphids; they may actually boost the fortunes of another important one, the slug, which is “emerging as a key pest” in the soybean belt, according to the report. Pointing to a 2015 study from Penn State researchers, the report notes that slugs aren’t affected by neonics, so they can gobble neonic-treated soy sprouts at will, accumulating the chemical. But when insects called the ground beetle—which has a taste for slugs but not soybean plants—eat the neonic-containing slugs, they tend to die. So slugs transfer the poison from the crops to their natural predator, the ground beetle, and throw the predator balance out of whack, allowing slugs to proliferate. As a result, the Penn State researchers found, neonic seed treatments actually reduce yields in slug-infested fields.

Of course, the most celebrated “non-target” insect potentially affected by neonics is the honeybee. As I reported last week, the EPA recently released an assessment finding that one particular neonic that’s widely used on soybean seeds, imidacloprid, likely harms individual bees and whole bee colonies at levels commonly found in farm fields. That’s because plants from neonic-treated seeds don’t just carry the poison in their leaves and stalks; they also deliver it in bee-attracting nectar and pollen.

While cotton is the imidacloprid-treated crop most likely to hit bees hard, soybeans, too, may pose a threat, the EPA found. The agency couldn’t say for sure, because data on how much of the pesticide shows up in soybeans’ pollen and nectar are “unavailable,” both from Bayer and from independent researchers.

That information gap may be cold comfort for beekeepers, but the agrichemical industry will no doubt seize upon it to argue that its blockbuster chemical is harmless to bees. The rest of us can savor the bitter irony that this widely used pesticide may be more effective at slaying beneficial pollinators than it is at halting crop-chomping pests.