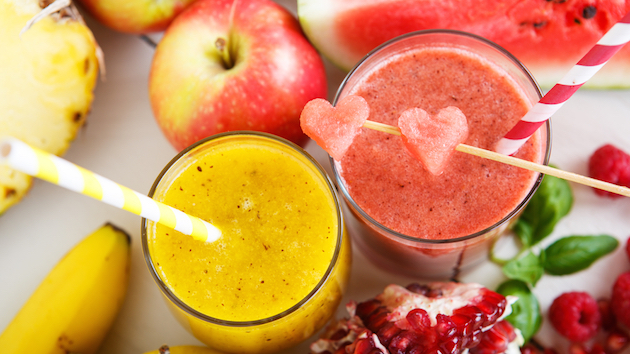 I encountered my first smoothie at the juice bar in the depths of an Austin food co-op back in the 1980s. Since then, the pureed-fruit drinks have risen to mainstream status under quite a health halo. The internet brims with “super-healthy smoothie recipes.” Nationwide, shops that peddle these frothy concoctions draw $860 million in annual sales, according to market researcher IBIS World. Like countless others, I often jar myself fully awake in the morning with the roar of a blender grinding bananas, blueberries, and yogurt into a luscious, quaffable mush.

7 normal snacks with a crazy amount of sugar

Have I been doing myself a disservice? I began to rethink my smoothie habit about a year ago, when I heard a segment on the Good Food podcast featuring Robert Lustig, a pediatric endocrinologist at the University of California-San Francisco, who argued that our bodies absorb blended-fruit sugars differently than sugars from whole fruit. Lustig is a high-profile proponent of the theory that excess sugar consumption drives high rates of obesity, type II diabetes, and other diet-related conditions. He was a major source for a 2012 Mother Jones exposé of the sugar industry’s lobbying might.

I recently called Lustig to hear more. To understand his smoothie skepticism, think of, say, an apple. In its whole form, it’s a tasty bundle of sugar, beneficial nutrients like vitamins and phytochemicals, and fiber, the plant matter that our bodies can’t metabolize but that drives proper digestion. Whole fruit contains two kinds of fiber: the soluble kind, which dissolves easily in water, and its insoluble counterpart, which doesn’t. According to Lustig, the two kinds of fiber work synergistically to “form a gel within the small intestine” that “acts as a barrier” slowing the rate at which your body absorbs nutrients.

And “that’s a good thing” when you eat an apple, he said, because it buffers the rate at which the apple’s sugar hits the liver. “That means you won’t overwhelm the liver’s capacity to digest the sugar, and the liver won’t turn the excess sugar into fat,” he explained.

However, when you puree that same apple into a smoothie, the mechanical force of a blender’s blades “sheers the insoluble fiber into tiny pieces” and functionally destroys it, he said. With the insoluble fiber gone, the soluble stuff can’t alone form the barrier that slows absorption, and the liver gets “pelted” by the sugar delivered by the blended apple. And just like when you drink soda, that sugary jolt can trigger an insulin response, and thus push your body in the direction of metabolic conditions, including unwanted weight gain, insulin resistance, or nonalcoholic fatty liver disease.

With the insoluble fiber gone, the liver gets “pelted” by the sugar delivered by the blended apple.

Now, unlike sodas, smoothies do contain valuable fruit-based nutrients and soluble fiber, which delivers important benefits even when separated from its insoluble counterpart. For example, Lustig said, bits of soluble fiber “act as scrubbies” to purge the colon of potentially cancerous cells. But in sugar terms, he said, smoothies behave in our bodies a lot like soda.

When I asked for more research on the topic, Lustig sent me to this 2009 paper by Penn State researchers. The study, it turns out, doesn’t directly bear on Lustig’s claim that pureeing fruit destroys insoluble fiber. But its results are interesting nonetheless. The researchers gave 58 adults a premeal snack consisting of 125 calories worth of either whole apple slices, applesauce, apple juice tweaked with soluble fiber, or regular apple juice. A control group got no snack at all. The subjects were then treated to an all-you-can-eat lunch, and the researchers recorded how rapidly they reported becoming full and how many total calories they consumed (data here).

To me, these results suggest there might be something to Lustig’s analysis that subjecting fruit to the forces of blades fundamentally changes the way our bodies absorb sugar. The paper didn’t comment on whether differences in soluble and insoluble fiber among the various forms of apple might have contributed to the difference, and the study’s lead author, Barbara Rolls of Penn State, declined to comment on Lustig’s analysis.

So I reached out to David Katz, director of the Yale-Griffin Prevention Research Center at Yale University, which is funded by the Centers for Disease Control and Prevention, for another perspective.

Maintaining a regular smoothie habit is “not nearly as good” as eating the same amount of fruit in its native state.

In an emailed note, he wrote that while the blending process “certainly [has] an effect” on fiber, there has been little research documenting precisely how much it breaks down insoluble fiber and reduces the benefits of fruit. He added, “Let’s face it: Chewing grinds up fiber to some extent, too.” That said, “we have a fairly solid basis for saying: Whole food is best,” he wrote.

For one thing, “blenderizing takes away chewing, which reduces the time spent eating” and may inspire you to take in more. Also, “fluids are less filling than solids.” Finally, he added, turning foods into liquids markedly raises their glycemic load, which is a measure of how much a particular amount of food affects blood sugar and insulin levels. Indeed, a whole apple has a glycemic load of 6, while a serving of apple juice clocks in at 30—higher even than Coca-Cola, at 16.

But Katz isn’t totally anti-smoothie. When they’re made without added sugars and other junk, he wrote, downing a smoothie is “far better” than not eating fruit at all, and they’re a “far better choice for a snack, or perhaps a meal on the go, than what prevails in our culture (chips, fast food, etc).” On the other hand, maintaining a regular smoothie habit is “not nearly as good” as eating the same amount of fruit in its native state.

After digesting all this, I’ve been giving my blender a rest and opting for whole fruit. But after decades as a smoothie fan, I occasionally surrender to the craving for one. I’m sure I have other habits that are worse.