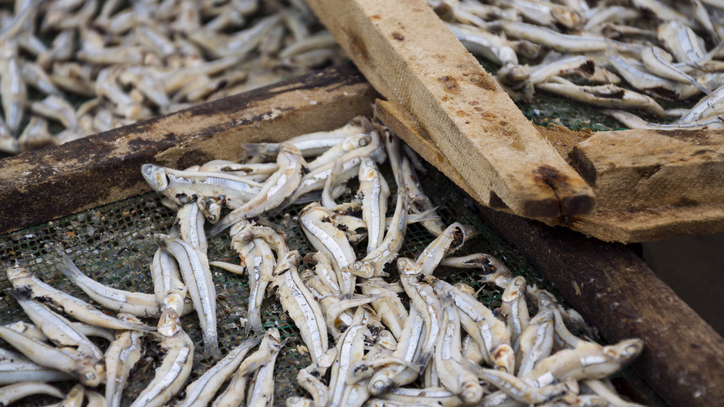 During the early morning hours at the ports of the Mediterranean, circa 50 A.D, fishermen would haul hundreds of anchovies, mackerel, and tuna back to shore, gut the carcasses, and leave them on the docks. As the sun heated the day, the fish entrails began to ferment. It’s not exactly the most appetizing scene to imagine, but it was the way that early chefs concocted one of the most highly sought-after sauce in ancient Rome: garum.

“[People] would move the fish outside of the city because it created such a stench,” says Tom Nealon, an antique cookbook collector and the author of Food Fights & Culture Wars: A Secret History of Taste. On the latest episode of Bite, we talked to Nealon about his attempt to recreate an ancient recipe that incorporated garum (sneak preview: It didn’t go very well). The interview with Nealon begins at 11:15:

Garum, or colatura di alici, wasn’t unlike Southeast Asian fish sauce, a condiment that gives Thai and Vietnamese food its distinctive umami flavor. In ancient Rome, the highest-quality garum was saved for elites, the lower quality for slaves.

But Garum brought more than a distinctive flavor to 3rd and 4th century cuisine—it also helped historians put a precise date on the fall of Pompeii. According to Pompeii’s Applied Research Laboratory, when leftover jars of rotten fish bones and entrails were discovered at the site of one of the ancient city’s producers, they were referenced against written accounts to confirm the eruption of Mount Vesuvius on August 24 of 79 A.D.

If you’re hungry for a taste from the past, it’s not too late to get a robustly savory dish made with garum. Companies in Italy’s Amalfi Coast still honor tradition and produce the sauce, and US restaurants like Ava Genes in Portland now import bottles.

To hear more from Nealon and discover other ancient recipes inspired by Season 7 of Game of Thrones, listen to our latest episode of Bite.