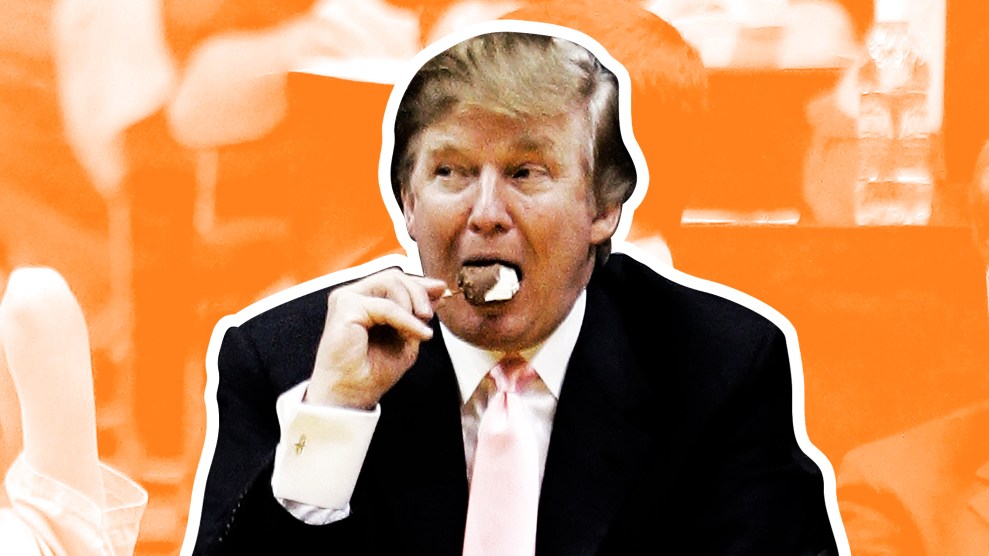 In yet another eye-popping move, this week President Donald Trump called for sharply cutting and bizarrely restructuring the nation’s flagship program for providing food aid to to poor people. His 2019 budget proposal takes aim at the Supplemental Nutrition Assistance Program (SNAP), formerly known as food stamps.

SNAP helps keep 1 in 4 US children and millions of disabled people adequately fed. The administration’s proposal would slash the SNAP budget by $213.5 billion between 2019 and 2028—a nearly 30 percent cut. Republican stalwarts like House Speaker Paul Ryan (R-Wis.) have been pining for such such cuts for years. What makes the Trump budget document so jarring is how it proposes to deliver those savings. It would dole out food boxes, through what White House Office of Management and Budget Director Mick Mulvaney called a “Blue Apron-type program.”

Anyone who has used a meal-kit service like Blue Apron might envision a chilled box featuring fresh meat and vegetables ready to be cooked into a sumptuous meal. The White House budget described something quite a bit more austere:

Under the proposal, households receiving $90 or more per month in SNAP benefits will receive a portion of their benefits in the form of a USDA Foods package, which would include items such as shelf-stable milk, ready to eat cereals, pasta, peanut butter, beans and canned fruit, vegetables, and meat, poultry or fish.

In other words, a box brimming with a bunch of cans and jars.

One might think an idea so confidently proposed might have the weight of a think-tank white paper, a university study, or a US Department Agriculture pilot program behind it. Not this one, reports Politico’s Helena Bottemiller Evich. “The idea that USDA would provide millions of low-income people packages of food on a national scale has not been floated by conservative think tanks, promoted by industry, or sought by previous administrations,” she reports. A USDA spokesman told her that the idea emerged from the mind of USDA chief Sonny Perdue, a former Georgia governor and agri-businessman with no experience in hunger or poverty policy.

Not surprisingly, anti-hunger advocates went ballistic. In a press statement, Lisa Davis, senior vice president of the anti-hunger group Share Our Strength, declared it a “disturbing and harmful agenda.” Robert Greenstein, president of the think tank Center on Budget and Policy Priorities, warned that “more homelessness and hunger would inevitably follow” from SNAP cuts.

Annie Lowrey, who covers economic policy for The Atlantic, delivered a blistering inventory of the “food box” plan’s faults on Twitter. Here’s how it started:

On the other hand, as fiscal expert Stan Collender put it in a Washington Post op-ed Tuesday, “presidential budgets aren’t about economic policy; they’re about political spin.” And Trump’s is an extreme version of this old tradition. He continued: “Trump’s new budget was doomed long before it ever reached Capitol Hill because it included big proposed spending cuts in very popular domestic programs the Republican-controlled Congress was never going to consider, especially in an election year.”

But these exercises are also aspirational—like the president’s late-night tweets, they give us a stark view into how Trump sees the world. In a recent New York Times op-ed, renowned economist Angus Deaton estimated that “there are 5.3 million Americans who are absolutely poor by global standards.” To them, the new budget brings a message of humiliation and insult.