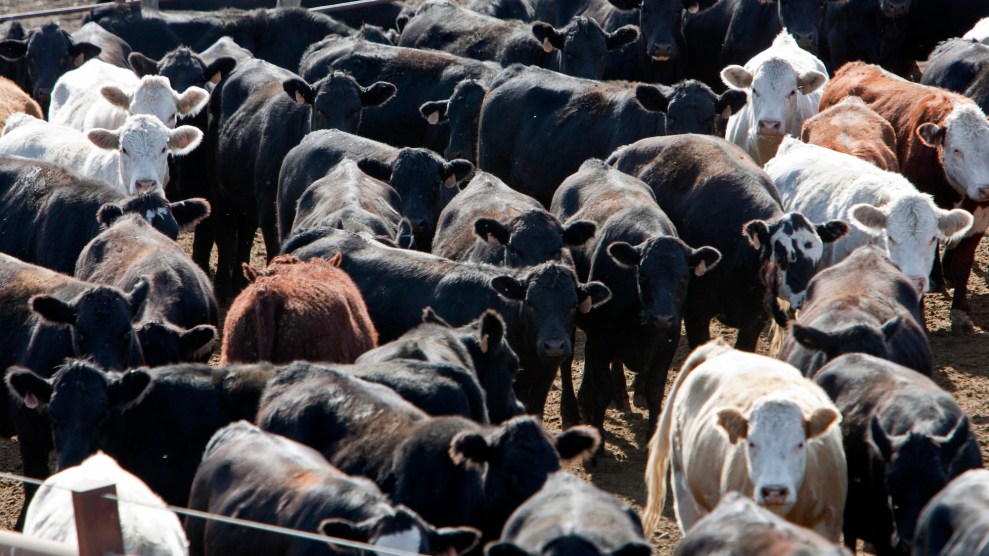 This spring, massive storms have slammed the Midwestern farm belt, leaving much of the area a soggy mess. Because of the conditions, corn and soybean planting is “waaaaaaaaaaaaaay behind” schedule, as the trade journal Successful Farming put it in a headline, and farmers may leave millions of acres unplanted as a result.

On Tuesday, a day after the US Department of Agriculture released its dismal planting-progress report, the Senate Agriculture Committee held a hearing (video here) on “climate change and the agriculture sector.” Ferd Hoefner of the National Sustainable Agriculture Coalition, a longtime watcher of farm politics on the Hill, said the committee hasn’t publicly discussed climate change at this level since it was under Democratic leadership during the ultimately failed Waxman-Markey climate bill back in 2010.

Given that the Senate is controlled by a political party that generally denies the threat of climate change, it was remarkable that the event happened at all. So it should perhaps be no surprise that real climate-related challenges like “more frequent climate extremes, flooding, and drought” were barely discussed. That’s a quote from the Fourth National Climate Assessment, a federally mandated report released last November that included a bracing section on agriculture. At the hearing, the report went unmentioned, its team of authors unheard from.

Several of the witnesses presented their respective industries as already climate friendly, thank you very much.

Rather than discuss the challenges of farming in an environment of increasing climate chaos, several of the witnesses presented their respective industries as already climate friendly, thank you very much. Although she didn’t mention it in the hearing itself, rancher Lyons-Blythe, a Kansas rancher who breeds Angus cattle, was speaking “on behalf of the National Cattlemen’s Beef Association,” an industry trade group, according to the Senate Ag Committee website. “The beef cattle industry has a great story to tell in the climate conversation,” she said. “Various technologies are helping us produce a safer product of with a reduced environmental footprint.” As an example, she cited the dosing of cattle with antibiotics, which “helps them utilize feed and water more efficiently.” (Go here for some of the downsides of that bargain.)

In his remarks, UC-Davis animal science professor Frank Mitloehner also focused on defending the US beef industry’s climate record—not surprising for a researcher who has disclosed receiving $250,000 in research grants from “agricultural commodities groups, such as beef producers.” He testified that all US livestock production contributes just 3.9 percent of US greenhouse gas emissions—echoing a claim he made in a 2016 paper (which put the number at 4.2 percent). But as a group of professors from Johns Hopkins University noted in a 2016 response, that reckoning excludes considerable emissions from the production of animal feed. In reality, the US meat industry is a massive consumer of corn and soybeans, and crop agriculture generates large amounts of the potent greenhouse gas nitrous oxide that don’t make it into Mitloehner’s calculation. In a recent column, I cite plenty of fresh research contesting the claim that the meat industry is a trivial contributor to climate change.

Tom Vilsack, former chief of the USDA under Barack Obama and now the CEO of an organization that promotes export of US dairy products, at least acknowledged that the dairy industry could cut its contribution to climate change. He testified that the industry is working on an initiative to “achieve net-zero emissions” through better management of cow manure, a major source of the greenhouse gases methane and nitrous oxide. Later in the Q&A part of the hearings, Vilsack also called for more Congressional funding for research and incentives to help farmers cut emissions, including “pilot farms” that would operate with government grants to experiment with new climate-friendly techniques.

Nebraska corn-and-soybean farmer Matthew Rezac spent most of his testimony touting his use of precision agriculture—new technologies that help farmers apply precisely calibrated amounts of fertilizer and other chemicals, cutting down on pollution and waste. Later, Sen. Sherrod Brown (D.-Ohio) asked Rezac about corporate consolidation in agriculture markets—the pressure felt by farmers when just a few companies exist to sell them seeds, pesticides, and fertilizers, and how the cost of those inputs has stayed high even as crop prices have plunged in recent years, putting Midwestern farmers in their worst economic crisis since the 1980s, with loan default rates spiking.

“I think you just hit everything right on the head,” Rezac responded, “Trying to make money today in this farming economy is virtually impossible.” In that context, he added, asking farmers to spend more money on climate-friendly practices is a non-starter. “The bankers are already saying, ‘you can’t spend more money.'” Although he seemed hesitant to mention it—”I don’t even know if I should get into this”—he raised the idea of carbon credits for farmers. That’s a program where farmers are paid for soil-conserving, carbon-sequestering practices like planting off-season cover crops. “I’m excited about it, I’ve looked into it—it’s a whole new avenue of income,” Rezac added.

Ricardo Salvador, director of the Food and Environment Program at the Union of Concerned Scientists, applauded Rezac’s off-the-cuff mention of carbon credits. Currently, Salvador said, farm policy much more lavishly funds programs that reward farmers to overproduce corn and soybeans than it does to reward them for climate-friendly practices. It would be “much healthier,” Salvador added, to switch to a system that directly incentivizes practices that trap carbon in the soil, like planting more crops than just corn and soybeans. A conventional corn-and-soybean farmer, speaking on the invitation of Republican ag-committee leadership, advocating paying farmers for climate-friendly practices is a “potentially huge opening,” Salvador said.

Overall, Tuesday’s meeting wasn’t the frank conversation about farming the nation needs as we head deeper into climate chaos, Salvador said. “But you have to crawl before you walk,” he added.