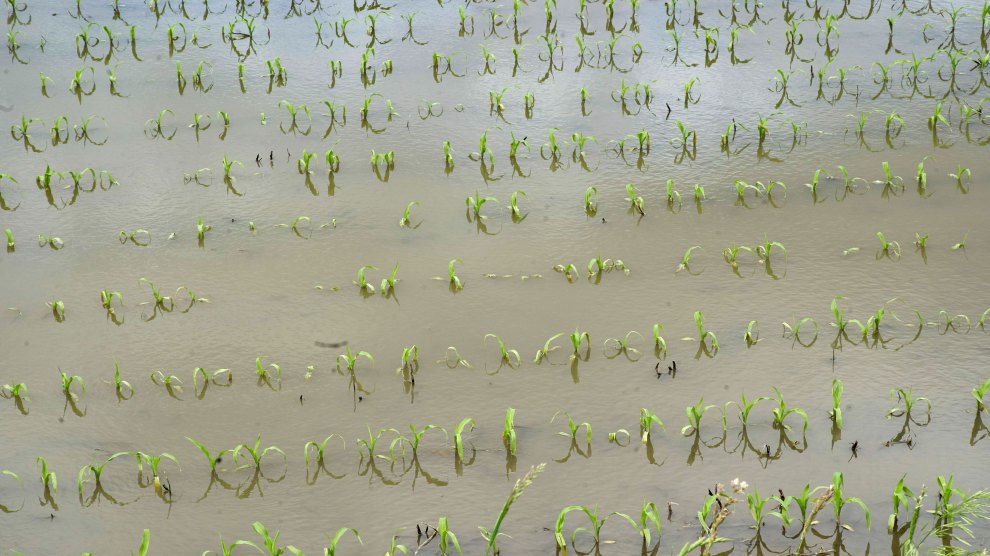 Corn in a field flooded by waters from the Nishnabotna River near Anderson, Iowa.Nati Harnik/AP Photo

It’s a sunny, hot June afternoon just outside the northwestern Illinois town of Kewanee, and fifth-generation farmer Brian Corkill really should be planting. By this time of year, he tells me, he’s typically “long since done” sowing 1,300 acres of corn and soybeans. Under normal conditions, “corn would be knee-high or a little taller,” he says. Not this year. He didn’t even start planting until May 16, a day after he’s usually done. On June 6, the day of my visit, he had just over half of his corn and none of his soybeans in the ground.

Corkill is not suffering from procrastination. Rather, he’s dealing with climate chaos. Since a massive bomb-cyclone storm roared through the Midwest in March, “it’s basically been six weeks straight of rain other than a few [dry] days”—overall, “the wettest spring I’ve experienced in my 29 years of farming.” And that’s after a volatile winter, and a rainy, snowy autumn before that. Although he didn’t experience flooding—he’s about 40 miles east of the Mississippi, which is still overtopping its banks—his land has been deluged with rain.

Now he’s in a race against time. Under federal crop insurance rules, farms lose one percent of their insurance coverage for each day crops go into the ground after the official “final planting date,” which varies by state and crop. For Illinois corn, that was June 5. That’s because late-planted corn typically delivers low yields. The entire corn belt—the vast swath of prime farmland that stretches from Nebraska to Indiana, Minnesota to Missouri—is a similarly rain-lashed, muddy mess. Overall, as of June 2, US farmers had planted just 67 percent of their corn and 39 percent of their soybeans, according to the USDA. By that date, they’ve normally planted 96 percent and 79 percent of these two crops, which undergird the American diet, providing the feed for the animals we eat as well as much of the sweetener and fat in processed food. According to the trade journal AgWeb, 2019 is the slowest planting season for corn on record.

A global crop glut, disputes with big foreign buyers, and dire planting weather—”It’s going to be a blow to everyone’s financial position.”

Even with the planting troubles threatening to crimp the fall harvest, corn and soybean prices remain locked in a half-decade slump, pushed down by rising competition from Brazil and Argentina and President Donald Trump’s ever-volatile trade wars with China and Mexico, big buyers of US crops. Put it all together—a global crop glut, disputes with big foreign buyers, and dire planting weather—and it makes a “series of events that we’ve never seen come together,” Gary Schnitkey, an agricultural economist at the University of Illinois, recently told USA Today. “It’s going to be a blow to everyone’s financial position.”

As for his farm, Corkill says that on parts of his fields, “water stood for weeks at a time.” Even in the past couple of days, he’s had to steer his tractor around “one or two spots with standing water” while planting seeds. In addition, he’s finding patches “where the soil’s just mucky and wet and you can’t plant it,” he says.

And he’s not just stressed about his corn and soybeans. He’s also worried because the fall rains and early snows disrupted his push to plant rye in the fall—a crop he sows after he has harvested corn and soybeans.

Those staple crops provide his year-to-year cash flow, while his rye is both a long-term investment in his soil and a kind of insurance policy against the very kind of heavy storms that have been lashing the corn belt all spring. It’s what’s known as a cover crop—grown not to be harvested and sold, but rather for the services it provides. Planted in the fall after the corn and soybean harvest, rye delivers a stand of vegetation that buffers soil from the impact of storms in the spring; and live roots that hold it in place and provide channels for rain to penetrate deep into the earth, reducing runoff and creating a store of water his crops can use later. Corkill’s rye also crowds out weeds, meaning he needs to use fewer herbicides later in the season; and when it decomposes, it plies the soil with carbon sequestered from the air. Carbon-rich soils are more resilient to both droughts and deluges—both of which are projected to visit the Midwest more often as the climate warms. (Here’s my 2013 piece on the magic of cover crops.)

Carbon-rich soils are more resilient to both droughts and floods.

Last fall, Corkill says, he had a tight window to plant his rye. Rains began soon after he finished the harvest in October, “so we only got a couple of days in the field where we could actually get anything done.” Then a foot of snow dropped just after Thanksgiving, “and that pretty much ended the fall.” As a result, he only got to plant about a third of the rye, leaving the rest of the ground bare.

We’re standing near one of his fields now, which sports a patchy stand of deep-green, waist-high rye. It’s patchy, he says, because it didn’t get much of a chance to thrive because the winter came on early and ultimately gave way to a relentlessly wet spring. But it’s much better than nothing, and on this hot, sunny day, he’s eager to hop into his tractor cab and guide the attached massive 16-row planter over the field to sow corn seeds into the field. Corkill likes to “plant green”—he deposits the seeds directly into the soil under the live cover crop, which he later kills with an herbicide. That planter looms behind us loaded with corn seed and ready to rumble. The reason it’s just sitting there is that Corkill’s busy hosting a field day for Practical Farmers of Iowa, a group that promotes sustainable-agriculture practices throughout the corn belt.

There are 17 of us milling about, rapt while Corkill explains the benefits and challenges of devoting resources to this non-cash crop. Sarah Carlson, strategic initiatives director for Practical Farmers of Iowa, tells me that 10 more farmers from around the area had signed up—but given it’s a rare sunny dry day and that they’re way behind, these would-be participants could not afford to be away from their tractors. When the event was scheduled, she says, the idea was for Corkill to show off a stand of young corn poking through a mat of dead rye. The goal was to demonstrate to the area’s farmers that, they, too could benefit from cover crops. “They need to hear it from him,” she says, pointing to Corkill—a well-respected peer with dirty hands, not a non-profit advocate or university researcher.

Cover crops are gaining traction among farmers, but the practice remains very much the exception, not the rule. In the spring of 2018, the most recent data available, fewer than 4 percent of Illinois and Iowa acres had off-season cover crops. In a future piece, I’ll lay out the dire consequences of leaving tens of millions of acres of some of the globe’s best soil bare during a stormy spring.

After dinner, Corkill went back out into the field to take advantage of a waning couple hours of daylight to fire up his tractor. The weather forecast was calling for no more rain until Sunday, giving him a window to make up for some lost time. “It’s going to be a long weekend,” he said.