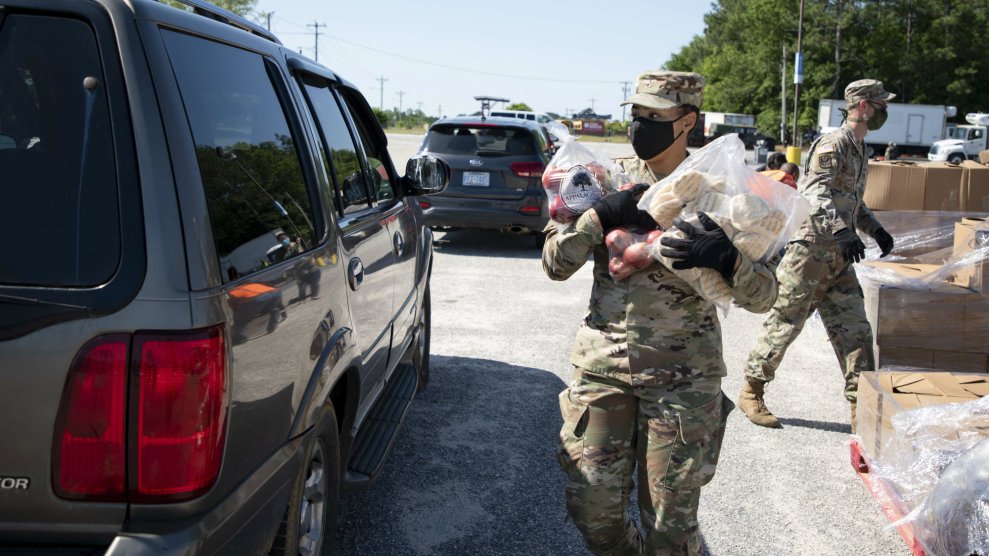 In just two months, the coronavirus has cost more than 86,000 people their lives and 36 million people have lost their jobs, but the Trump administration is still trying to cut food stamps. Last December, the US Department of Agriculture proposed a federal rule that would remove 700,000 people from the Supplemental Nutrition Assistance Program slated to go into effect in April. The new rule tied even more stringent work requirements to receiving food assistance. Citing the pandemic, a federal judge halted the rule change, but this week Trump administration filed an appeal in federal court.

America’s hunger crisis has become more urgent as the number of people seeking food assistance has skyrocketed. Food banks and other charities have reported incredibly long lines and crowded facilities as they try to meet the growing need across the country, since the shutdown of businesses during the coronavirus pandemic has led to record unemployment. But still, the administration is pushing forward with the new rule that makes the work requirements for aid recipients who have no dependents described as “able bodied” even more stringent. In 2019, 38 million people received food aid through the SNAP program, which is administered by the US Department of Agriculture, but advocates have long urged for expanded eligibility. Nonetheless, it remains a lifeline in poor communities and an economic engine as it creates jobs in the food and grocery sector.

As I reported last December, anti-hunger advocates say the proposed measure is draconian:

There are already tough restrictions in place covering who can receive federal food assistance. In 1996, as part of President Bill Clinton’s sweeping welfare reform, then-Reps. John Kasich and Bob Ney, both Ohio Republicans, added a provision to the legislation limiting benefits for “able-bodied adults” between the ages of 18 and 49 with no dependents. After three months of assistance, these SNAP recipients must prove they are working at least 20 hours a week to continue receiving benefits. The measure, however, allowed the governors of states with high unemployment rates to request waivers from the three-month cutoff.

In March, when the novel coronavirus began spreading rapidly around the country, USDA Secretary Sonny Perdue implied at a congressional hearing that the administration still expected people to look for work during a pandemic. “If they can’t find work in an economy of 3.5 percent unemployment,” Perdue said, “I’m not sure when they can.” The unemployment rate is now 14.7 percent. There is no indication that economic recovery will come swiftly.

A few days after the hearing, a federal judge blocked the rule. “As a global pandemic poses widespread health risks, guaranteeing that government officials at both the federal and state levels have flexibility to address the nutritional needs of residents and ensure their well-being through programs like SNAP, is essential,” Chief Judge Beryl Howell of the US District Court in Washington, DC wrote.

The obvious answer to the critical need for food access would be to expand food stamps, as the US has done during other economic recessions. Sens. Kamala Harris (D-Calif.), Kirsten Gillibrand (D-N.Y.), and Bernie Sanders (I-Vt.) introduced a bill that would expand SNAP access during the pandemic and make the changes permanent. The bill is still pending.

But it appears that Trump’s USDA is committed to cutting services for the poor—despite the mass deaths and widespread economic calamity. “While we’re currently in a very challenging environment, we do not expect this to last forever,” the USDA said in a statement to Reuters. “We must prepare our workforce to rejoin the economy when our nation reopens.”