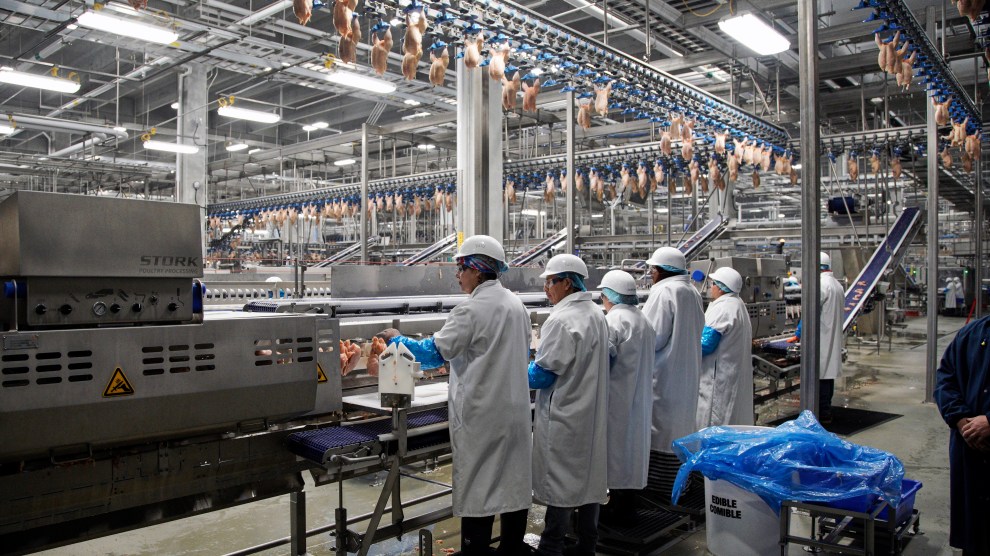 Mike works as a mechanic at a poultry processing plant in Mississippi. (He’s using a pseudonym because speaking to the media could cost him his job.) Last August, his was one of the hundreds of families affected by the Immigration and Customs Enforcement raids at poultry processing plants across central Mississippi. About 680 workers were rounded up and put into ICE detention.

Mike’s wife was one of the workers detained by ICE after the raids. Since she lacked documentation, she faced criminal charges for working at the plant under a fake name. She chose to flee to her home country in Central America, taking their two kids with her. Now Mike lives alone, working at a plant where the lack of personal protective equipment (PPE) leaves workers particularly vulnerable during the coronavirus crisis.

“Nobody has masks because they’ve run out of masks. We are not protected by nothing,” he told senior producer Caitlin Esch on The Uncertain Hour, an investigative podcast from Marketplace.

Molly Schwartz interviewed Caitlin Esch about her reporting on an episode of Bite podcast. Listen to their interview:

A complicated immigration status might make someone less likely to complain about poor conditions. As Esch discovered through her reporting, there’s a reason why so many immigrant workers from Latin America work at poultry processing plants in the middle of Mississippi. In the 1930s and 1940s, it was mostly white women who worked at plants in the deep South. After the plants were desegregated in the 1960s and 1970s, the workforce became mostly Black.

In the 1990s, as some poultry plants made moves to unionize (as many beef and pork plants have done), the owner of a major company called B. C. Rogers Poultry, Inc. developed a strategy for bringing in cheap, non-union labor. The company implemented an initiative called the “Hispanic Project” to bring in immigrant workers from Latin America to work at their plants. According to Angela Stuesse, an associate professor of anthropology at the University of North Carolina, Chapel Hill, and author of the book Scratching Out a Living: Latinos, Race, and Work in the Deep South, B. C. Rogers started shipping in immigrant workers by paying their bus fare from South Florida to central Mississippi.

“They just kept bringing them,” said Stuesse in an interview with Esch. “And for four years, they brought a Greyhound bus each week of workers for the plants.” (B.C. Rogers was eventually bought by Koch Foods.)

Today, upwards of 70 percent of poultry processing plants are not unionized. Labor inside these facilities has always been low-wage and physically demanding. Workers are exposed to dirt, blood, and ammonia from chicken poop. They make up to 60,000 repetitive motions in a single shift, which can lead to injuries like carpal tunnel syndrome. The Department of Agriculture, which previously had regulations in place that limited poultry processing plants to line speed limits of 140 birds per minute, announced in January 2019 that it would start handing out waivers to let processing plants increase speeds to 175 birds per minute, thereby putting workers further at risk by letting companies make them work faster. In her reporting, Esch has shown how poultry companies have started subcontracting out most of their labor over the past fifteen years, thereby exempting them from providing workplace benefits.

Rural counties with meatpacking plants with outbreaks of COVID-19 have infection rates that are five times higher on average than other rural counties.

The close working quarters, scant PPE, lack of sick days, and almost no worker protections have made poultry processing plants breeding grounds for the coronavirus. Scott County, Mississippi, where many of these plants are located, has become a hotspot. Scott County has about 20,000 people and it has 721 COVID cases as of June 26. As Esch pointed out, “it’s one of the counties with the most COVID cases per capita in the country.”

Mike worries he could contract the virus on the job, but he can’t afford to quit. “I’m kind of afraid cause we are really close and we’re exposed too much,” he told Esch. “Sometimes we are together and there’s not like 10 people, it’s more than like hundreds. I think 500 or little bit over. I spoke to the manager the other day. They want us to keep working…because we have to provide food for the United States.”