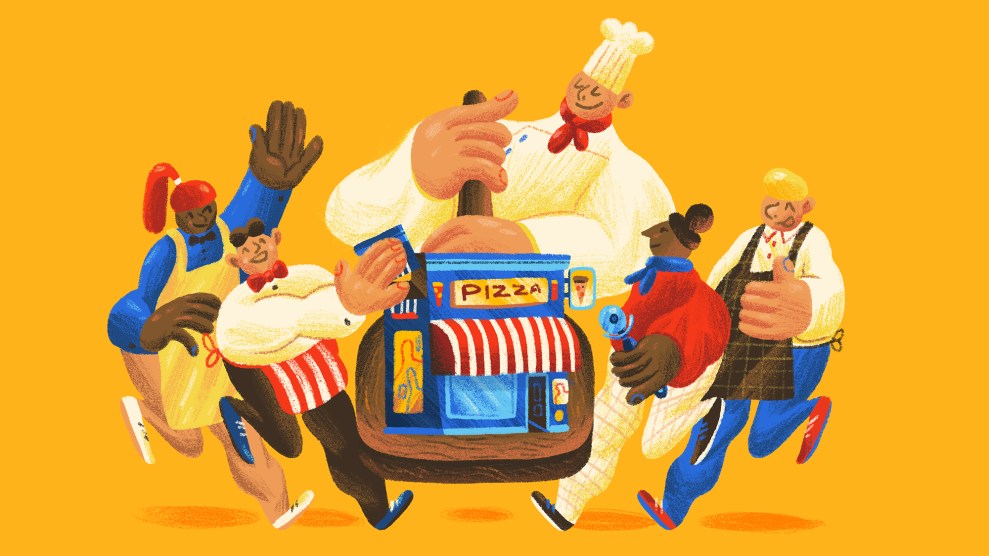 The lockdowns last March nearly spelled doom for Joe Squared, a pizzeria and music venue in Baltimore’s arts district. The popular eatery already had some outstanding debts from a recent expansion; all of a sudden it had to curtail its hours and shut its dining room. General Manager Okan Arabacioğlu recalls frantically trying to make the numbers work with owner Joe Edwardsen, but they decided they couldn’t sacrifice the quality of the coal-fired pizza or the living wage they paid employees. “So at that point,” Arabacioğlu says, “we were like, let’s wrap it up.” Joe’s closed its doors for the next nine months.

“We have this hero love of the solo entrepreneur.”

The two men continued to brainstorm about what to do next. Edwardsen was considering getting out of the restaurant industry to spend more time with his family. Joe’s had previously been located across from Red Emma’s, a worker-owned bookstore and cafe, which got them thinking: What if Edwardsen passed on the restaurant to his workers? Restructuring would take the load off a sole proprietor, and each worker-owner would be more invested in the business’s well-being. A 2016 meta-analysis of more than 100 studies across several countries linked employee ownership to better productivity, organizational stability, and business survival. In times of crisis, co-ops have been shown to be more resilient than traditional enterprises and less likely to lay off workers.

In November, Edwardsen doled out an equal slice of ownership to 14 original employees. Each worker in the cooperative now has one vote on a governing board and will enjoy an equal share of two-thirds of the pizzeria’s future profits (the other third will be reinvested in the restaurant). And aside from their work in the kitchen or at the takeout window, employees now shoulder some of the administrative duties, learning the skills to run a business.

Most Americans have never eaten at a cooperatively run restaurant, much less shared in the ownership of one. Co-ops are more popular in countries like Italy or Spain, says Alison Lingane, co-founder of Project Equity, a consulting firm that helps companies transition to employee ownership. Lingane never heard a peep about cooperatives while studying at UC Berkeley’s Haas School of Business, which isn’t surprising: Few B-schools include the model in their curriculum. Lingane suspects there’s a cultural component to America’s allergy to co-ops. “We have this hero love of the solo entrepreneur,” she says.

But the economic tumult of the last 12-plus years has people searching for alternatives. Before the Great Recession, there were only about 350 worker co-ops in the country; that number climbed to 465 by 2019, about a tenth of which are restaurants, cafes, or bakeries. The pandemic could be a catalyst. During the past year, Lingane says, Project Equity has seen “a lot more” calls from business owners inquiring about employee ownership models. There’s a feeling that “capitalism has failed our generation over and over again,” Arabacioğlu, who’s 37, says. “We need a new idea, something that changes the rules a little bit.”

Enjoying a share of revenue entices many workers to this plan. Business ownership is among the most productive assets for building wealth, and co-ops give a wider range of people access to that engine: The majority of co-op owners are women, and nearly 38 percent are Latino. Sarah Vegas, a worker-owner at Niles Pie in the San Francisco Bay Area, made $8,000 extra one year due to the bakery’s success. “That’s life-changing money,” she says. “It’s the difference between having a car that breaks down all the time and a good car.”

The majority of co-op owners are women, and nearly 38 percent are Latino.

Because restaurants operate on very slim margins, profit-sharing won’t always lead to a sizable increase in income. And cooperative decision-making can be messy and inefficient. A co-op “is not a silver bullet that solves the problem of the industry,” says Melissa Hoover, executive director of the think tank Democracy at Work Institute—especially the restaurant industry, which continues to consolidate at a terrifying clip.

But the chance to share in the decision-making process can mean a lot. During the Bay Area’s initial shelter-in-place restrictions, Berkeley’s Cheese Board Collective voted to dip into its reserves to continue to pay about 70 owner-members rather than lay some of them off. When Baltimore started allowing restaurants to serve at 25 percent capacity, the owners of Joe Squared, many of whom live with elderly or immunocompromised family members, voted to continue operating strictly as a takeout and delivery restaurant until everyone got vaccinated. “In co-op situations it’s more about the community and the business surviving,” Arabacioğlu says, “rather than just making profits off people.”

Hoover sees potential for how the cooperative mentality might fuel larger transformations in the food world. A spark of this can be seen in San Francisco, where Reem Assil, a Palestinian- and Syrian-American chef, developed a paid apprenticeship to support her employees as they help her convert her eponymous Arab bakeries into a cooperative. During the pandemic, Reem’s began relying on a collectively owned bike courier company for deliveries. Assil envisions an ecosystem of interconnected co-ops supporting each other. “We need to build resilience at the local level,” she says. “Worker ownership is community ownership.”