THE ART OF BEING GEORGE….In a package called “Art and Culture In the Bush Era,” Newsweek asked its cultural critics to pick the “one work in their field that they believe exemplifies what it was like to be alive in the age of George W. Bush.” Let’s argue over some of their choices, OK?

First off, there are the two TV critics, who practically bent over backward to avoid naming 24. I’m not saying that Battlestar Galactica and American Idol are bad choices, mind you, and I know that maybe it seems a little too obvious for guys who are paid to think nonobvious thoughts about this stuff, but come on: 24 is George Bush’s America. Case closed.

Art critic Peter Plagens chose Jeff Koons’s “Hanging Heart,” but he’s wrong. The only possible choice is everything ever manufactured by Damien Hirst, who has made a career out of convincing people to give him fantastic sums of money for stuff that everyone knows is obvious crap — and then lying about it on the occasions when people don’t. Read this, for example, and tell me if it doesn’t scream “George Bush”:

There was the summer of 2007 when thousands of people lined up outside White Cube waiting to glimpse a human skull cast in platinum and covered with 8,601 diamonds that he claimed to have sold at its $100 million asking price. When he was pressed, however, it turned out that the buyer was actually a consortium of investors that included the artist himself; Jay Jopling, owner of White Cube; and Frank Dunphy, Hirst’s business manager.

Music critic Lorraine Ali chooses Green Day’s “American Idiot.” Wrong again. The correct answer is a tie between the insane protest over Dixie Chick Natalie Maines saying “we’re ashamed the President of the United States is from Texas” and Toby Keith’s “Courtesy of the Red White and Blue.” 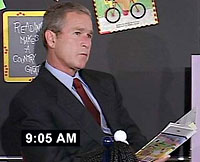 Yes, yes, I realize that Natalie Maines’s comment is not technically an actual work of art, but we shouldn’t let that stand in the way of a higher truth.

The book critics chose The Corrections and Rick Warren’s The Purpose Driven Life. Wrong and wrong. In the fiction category, the iconic book of the Bush era is clearly The Pet Goat. Right? The nonfiction category is a little tougher, but I think Jane Mayer’s The Dark Side deserves the nod for the book that best represents what Bush and Cheney were really all about. A close second, perhaps, goes to Glassman and Hassett’s Dow 36,000, which represents Bush and Cheney’s own personal fantasy of what they were all about. Yes, it was written in 1999, but remember that we’re going for higher truths here.

The movie critics chose Blackhawk Down and Borat. I guess those choices are OK. But instead, how about the second Star Wars trilogy, another painful reminder that sequels are usually a disappointment?

UPDATE: In comments, PureGuesswork makes a strong case in the music category for Britney Spears: “She spent the last eight years coming up with new ways to fuck up, and now she is worried about her legacy.”

UPDATE 2: In the movie category, lots of votes for Idiocracy. Hard to argue with that.