Ezra Klein is frustrated that Congress is going on vacation when they’re within spitting distance of constructing workable healthcare reform legislation:

To be so close to a finished product and a mark-up and a vote and then, for no actual reason, abruptly stop, is insane. It means a cessation to discussions, negotiations, relationships, 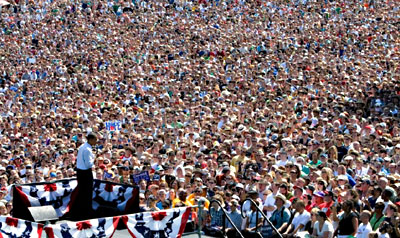 hearings, to the work of legislating. It means that the hard work of creating this policy will stop for a month and give way to the politics of fighting over it. That’s not healthy. “Ideas can melt in the sun,” Nancy Pelosi said when I interviewed her Wednesday, “especially in August.”

I’m not sure there’s much that can be done about this, but there’s more than one way to look at it anyway.  The first way is the conventional one: Republicans are hoping that the August recess will slow things down. It gives them more time for attack ads, more time to manufacture uncertainty, and more time to drive wedges between unsteady allies on the pro-reform side.

That’s all true.  But the main thing that happens during the August recess is that everyone in Washington goes home and talks to people in their district.  If their constituents are largely opposed to healthcare reform, it hurts the cause.  But if they’re pissed off about the status quo and want to know why Congress can’t get off its butt and do something — well, that can actually speed things up.

Now, that’s not normally what happens.  And it won’t this time either — unless Barack Obama’s army of supporters are still ready to go out and answer the call of reform.  I’ve long been skeptical about whether his famous electoral machine would continue to work after the campaign was over, but if there was ever a time to prove me wrong, it’s now.  If Obama’s army is still willing to go out and do battle, they should show up now and start putting the fear of God into their congressmen.  If that happens, the August recess will be the best thing that ever happened to healthcare reform.

I wouldn’t bet the farm on that happening.  But congressmen listen to their constituents when they go home for the holidays, and there’s no reason reform advocates can’t use that to their advantage.  It all depends on whether we’re really as motivated and as angry as the opposition.  Are we?