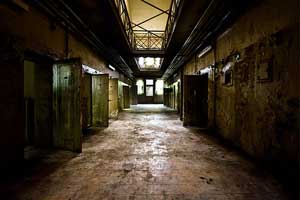 A couple of weeks ago I described California as “a penal colony with a nice coastline.”  The coastline is still nice, but a three-judge panel has finally ordered the state to get off its ass and do something about our wretched and overflowing prison system:

California’s prisons are so overcrowded that the state is violating inmates’ constitutional rights, three federal judges ruled today in a decision imposing a cap on the prison population that will force the state to release nearly 43,000 prisoners over the next two years. The 185-page opinion also accused the state of fostering “criminogenic” conditions, compelling former prisoners to commit more crimes and feed a cycle of recidivism.

A combination of dumb drug laws, dysfunctional parole policies, “three strikes” laws passed by initiative, an endless procession of tougher-than-thou politicians, and a famously thuggish and politically powerful prison guards union has gotten California into this mess.  James Sterngold wrote about it for us last year:

California’s archipelago of 33 prisons houses more than 170,000 inmates, nearly twice the number it was designed to safely hold. Almost all of its facilities are bursting at the seams: More than 16,000 prisoners sleep on what are known as “ugly beds” — extra bunks stuffed into cells, gyms, dayrooms, and hallways. [Governor Arnold] Schwarzenegger has referred to the system as a “powder keg.” 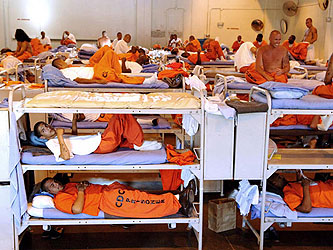 ….For more than three decades, California has been trapped in a self-perpetuating cycle where putting more people in prison for longer periods of time has become the answer to every new crime to capture the public’s attention — from drug dealing and gangbanging to tragic child abductions. Spurred on by a powerful prison guards’ union and politicians afraid of looking soft on crime, corrections has become a bottomless pit, where countless lives and dollars disappear year after year. And now that it has metastasized to the point where even a tough-guy governor and the guards agree that the prisons must be downsized or else (see “When Prison Guards Go Soft”), every attempt at change seems stymied by inertia. The sheer size of the system has become the biggest obstacle to finding alternatives to warehousing criminals without preparing them for anything more than another cycle of incarceration. “The public believes the prison population reflects the crime rate,” says James Austin, a corrections consultant who has served on several prison-reform panels in California. “That’s just not true. It’s because of California’s policies and the way it runs the system.”

So will the judges be able to make a dent in all this?  Hard to say.  Every attempt to date has failed, and the LA Times quotes a spokesman from the California Attorney General’s office saying, “This order doesn’t release anybody from prison, it just orders the state to come up with a plan. 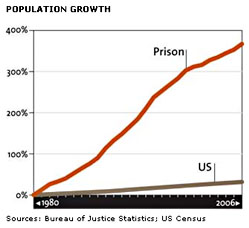 We have no immediate plans to appeal this particular order, but there would definitely be thought given to appeal any order that would ultimately order releases.”

It wouldn’t be hard to shrink prison populations drastically while reducing crime, by doing a better job of supervising prison releasees on parole using drug-testing and position monitoring with swift and certain, but mild, sanctions for each violation of the rules….That’s the big finding from Project HOPE in Hawaii. So far, though, there’s no indication that the Governor or the Department of Corrections and Rehabilitation are thinking along those lines. Instead they’ll fight the case all the way up to the Supreme Court, and then blame the judges when their failure to do their jobs leads to a crime increase.

What a mess.  And it’s not just California, of course.  We’re just the worst.  For a look at the big picture, check out our special package on the American penal system: “Slammed: The Coming Prison Meltdown.”