Today, under the headline “Transparency like you’ve never seen before,” the White House released visitor records from January through June.  But wait!  It’s not all the visitors.  It’s only a selective dump of names that people specifically asked about. 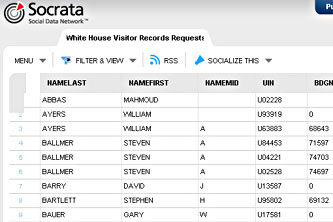 Someone submitted a request about Bill Ayers, for example, so all the “William Ayers” records were released.  But guess what?  There’s more than one guy in the country named William Ayers:

A lot of people visit the White House, up to 100,000 each month, with many of those folks coming to tour the buildings. Given this large amount of data, the records we are publishing today include a few “false positives” — names that make you think of a well-known person, but are actually someone else.  In September, requests were submitted for the names of some famous or controversial figures (for example Michael Jordan, William Ayers, Michael Moore, Jeremiah Wright, Robert Kelly (“R. Kelly”), and Malik Shabazz).  The well-known individuals with those names never actually came to the White House.  Nevertheless, we were asked for those names and so we have included records for those individuals who were here and share the same names.

Yes, seriously.  Max Doebler, for example, is the White House ceremonies coordinator, and sure enough, there are 29 visitor records linked to luncheons and receptions where he’s listed as the official host.  Bill Ayers is one of the many people who were there for public tours.  (Plus a second mystery Bill Ayers who was there for some other reason.)

This is kind of ridiculous, isn’t it?  I suppose it’s easy enough to filter out the dross once you figure out the right codes, but it almost seems like the White House is deliberately trying to inundate everyone in useless mountains of data by including this stuff.  In particular, when the end of the year rolls around and we get the full dump, do we really need the names of all 500,000 people who have been on a tour of the residence?  Is it even right to make all these names public?  Is the White House staff playing a quiet little joke hoping for a few reactions like this?  What’s going on?