From Sarah Palin, after Bill O’Reilly asked her if she thinks she’s qualified to handle “the most powerful job in the world”:

I believe that I am because I have common sense, and I have, I believe, the values that are reflective of so many other American values. And I believe that what Americans are seeking is not the elitism, the kind of a spinelessness that perhaps is made 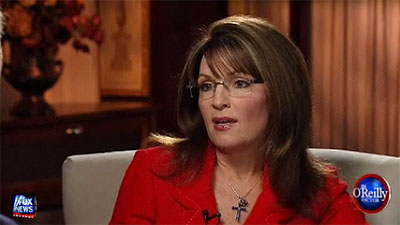 up for that with some kind of elite Ivy League education and a fact resume that’s based on anything but hard work and private sector, free enterprise principles. Americans could be seeking something like that in positive change in their leadership. I’m not saying that has to be me.

I’ve been waiting for this transcript to appear ever since I heard this segment last night.  I started laughing halfway through and couldn’t stop, which probably just proves that I’m one of those sneering coastal libertines Palin is talking about.  But there you have it: Palin is qualified to be president because she’s got American values and she isn’t a spineless elitist.

And yes, I know that I should probably pay less attention to Palin.  Sorry.  I can’t help myself.  Her word-salad-straight-from-the-limbic-system approach to life is just too fascinating.  But as long as we’re on the subject of elitist condescension toward Palin, check out this part of the O’Reilly interview about Iran:

PALIN: Let’s start considering the sanctions that we should have been applying already, especially in this past year. Let’s start looking at cutting off their imports of refined petroleum products.

O’REILLY: Does that mean a blockade, a naval blockade?

PALIN: We need to at least be willing to do such a thing and discuss it with our allies. And we need to be working closely with France and Britain, or other allies whom we can count on even.

O’REILLY: But they’re already onboard. The primary…

PALIN: They’re on board with what though? What were…

O’REILLY: They’re onboard with economic sanctions against Iran. Do you know the country that isn’t onboard, that’s causing all the trouble here?

PALIN: Well, we have to question Russia’s commitment to all this also.

O’REILLY: Excellent. Russia is the problem.

Palin was apparently unaware that Britain and France are already on board within beefing up sanctions on Iran, but that’s par for the course with her.  Hardly worth mentioning.  But notice O’Reilly’s reaction: he starts quizzing her like a big brother.  When she manages to pluck the right answer out her mental note file, he beams and almost pats her on the knee.  “Excellent.  Russia is the problem.”

If Charlie Gibson or Katie Couric had pulled something like that, the conservosphere would be apoplectic with rage over their patronizing, elitist treatment of Palin.  Do you think O’Reilly will get the same treatment?  Me neither.

(BTW, I actually give O’Reilly some points for the way he conducted the interview.  Sure, it was basically friendly, but it wasn’t fawning, and he did ask some tough questions and then fight back a bit when she delivered mangled platitudes instead of answers.  Overall, pretty good for a Fox host.)