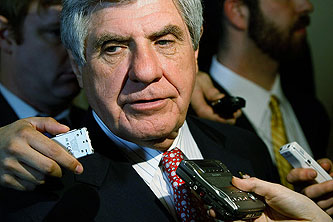 Finally, some good news: Sen. Ben Nelson (D–Neb.) has agreed to support the Senate healthcare bill.  That’s 60 votes, and that should be the ball game.

So what got his vote?  Aside from a comically transparent piece of bribery that gives Nebraska a little extra Medicaid money, it was a deal over abortion language. Here’s the LA Times explanation of Nelson’s “opt-out” provision:

Under the agreement, individual states would be allowed to prohibit insurers from offering abortion services in new regulated insurance marketplaces, or exchanges, where Americans who do not get health benefits through work would shop for coverage. Senate officials said that is consistent with current law, which gives states this authority over their insurance markets.

But if states do not exercise that option, insurers would be free to offer abortion coverage to customers in an exchange, even if they receive federal subsidies. If a woman who receive a subsidy wants to get a policy that covers abortion, she would have to send two payments to the insurer, one of which would be placed in an account reserved for abortion coverage.

Any insurer that offers an plan with an abortion benefit would also have to offer a parallel plan that does not cover abortion services.

This is….not that bad, actually.  Obviously it’s not as good as full funding for reproductive services, but that was never even remotely on the table.  But not only does this language mean that probably two-thirds of the population will have access to abortion coverage through the exchange, it also (I think) relieves the fear that the Stupak amendment in the House bill would eliminate abortion coverage from private insurance altogether.  The argument was that insurers would decide it was too much trouble to offer multiple policies and would just default to the version they offered on the exchange, which wouldn’t cover abortion services.  But Nelson’s compromise makes it clear that there are going to be multiple policies one way or another, so there’s little reason to think that current private coverage will change much.

That’s my first take, anyway, and since Barbara Boxer and Patty Murray support Nelson’s language, I assume they see it the same way.  Curious to hear from others on this, though.

Onward, then.  I always figured that Nelson would eventually compromise, since I think he’s driven largely by genuine, longstanding concerns, not by personal pique.  But he sure had me thinking otherwise for the past couple of days.  In the end, though, he hasn’t gutted any major provisions, he’s agreed to a constructive compromise on abortion, and his only price was a ridiculous but tiny deal for Nebraska on Medicaid reimbursement.  Not bad.  Now all we have to do is rein in Bart Stupak, who’s busily trying to scuttle the whole thing.