I feel like I should say something about the big press conference Obama just held. It’s not like he does a whole lot of them. But it seemed pretty soporific to me. On the one hand, it’s true that when he said he was “angry and frustrated” about the BP oil spill, he sure didn’t seem very angry or frustrated. On the other hand, watching the CNN dimwits after the 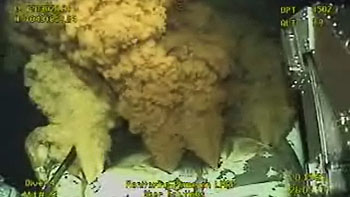 Honestly, this is just one of those lose-lose situations where Obama’s long view of politics will hopefully serve him well. It’s pretty plain, after all, that there really isn’t much the federal government can do. All the expertise for dealing with stuff like this lies with the big oil companies. And every big oil company is working on it already. The problem isn’t a lack of effort on their part or on the part of the government.

But Major Garrett wants to know if Obama really has his “boot on BP’s neck,” and everyone else seems to be nodding along. I guess it’s the kabuki of our times. The president has to be In Charge whether he can actually do anything or not.

Of course, what everyone should be asking is not what the feds are going to do about capping the leak, but what they’re going to do to make sure all the oil is cleaned up afterward. That’s finally starting to get some attention now that oil is onshore, but the story is much bigger than that. There’s 20 million or more gallons of oil sitting in a huge underwater plume off the shore of Louisiana right now, and the big question is what BP is going to do about that. And what we’re going to do to make deepwater platforms safer in the future. If the “top kill” effort to stop the spill works, the dramatic part of this story will finally be over. The real part will just be starting.