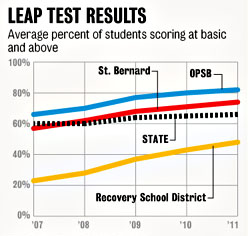 Alex Tabarrok links to a New Orleans Times-Picayune story showing the dramatic effects of school reform in New Orleans following the devastation of Hurricane Katrina in 2005. It’s impressive. Statewide, the number of kids scoring at basic or above went up about five percentage points. In New Orleans it went up around 25 points in the charter-oriented Recovery School District.

Still, be careful. New Orleans has changed a lot in the past six years. The median income has increased from $31,000 to $40,000. The black share of the population has decreased by five percentage points. And the share of residents living in high poverty neighborhoods has gone down by nearly ten percentage points. Those are pretty big changes, and all of them are well known drivers of test scores.

At a glance, the New Orleans test scores look even more impressive than you’d expect when you take those demographic changes into account. But we’ll need a considerably more detailed analysis before we can genuinely conclude that their educational reforms have really worked.