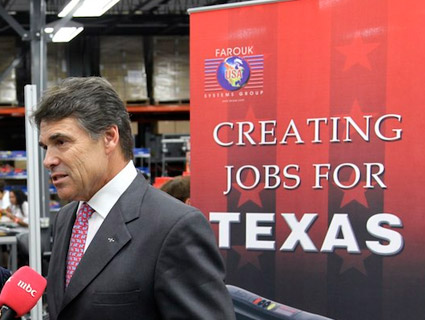 So what’s the real skinny on the “Texas Miracle”? Without diving into every last detail (I’ll provide some links for that), here are the main bullet points:

I think it’s obvious that there are lots of openings to criticize both Texas’ economic performance and Rick Perry’s role in it. For one thing, the Texas virtues that Perry likes to emphasize are actually common to lots of low-tax, low-service states in the Sun Belt and the South. As Ed Kilgore says, “Eventually, someone will draw attention to the fact that if Perry’s low-tax, low-services, corporate-subsidizing policies really were an economic cure-all, similar conditions should have made states like Alabama and Mississippi world-beating dynamos years ago.” This is going to make it hard for Perry to make a convincing case that taxes and regulation and general business friendliness are really behind his state’s performance. What’s more, there are lots of obvious chinks in the Texas armor: its poor rate of health care coverage, its high poverty rate, its weak educational system, and so forth.

And yet…jobs! It’s still the case that Texas has created lots and lots of jobs and has attracted a huge influx of new residents thanks to those jobs. No one’s putting a gun to their heads and forcing them to move to Houston, after all. No matter how many hits Perry takes over his simplistic explanations, and no matter how many sophisticated arguments his opponents make about the emperor’s lack of clothes, it’s still the case that Texas has created lots of jobs. All Perry has to do is repeat that until his face turns red while tossing out some folksy mockery of the eggheads and bureaucrats and their ivory-tower Harvard counterarguments. After all, who are you going to believe, all those East Coast twerps who have never run a company in their lives, or your own eyes?

This is going to be a tough row to hoe for Perry’s detractors. It’s worth going after it, but in the end, Texas’ record on jobs is good enough and real enough that Perry will probably be able to brush off most of the criticism. The Texas Miracle is going to be one of his strongest calling cards.

His weakness for Texas-style crony capitalism, however, might be a real problem. I suspect we’re going to be hearing a lot more about that as the oppo teams start to seriously gear up.