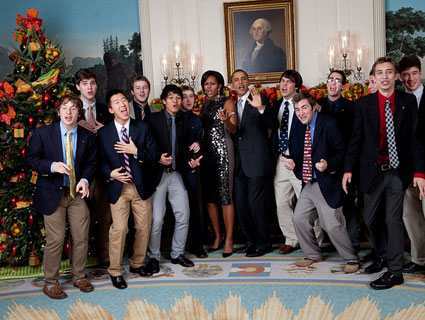 President Barack Obama and First Lady Michelle Obama pretend to sing with an a cappella group in the Diplomatic Reception Room of the White House during a holiday reception.<a href="http://www.flickr.com/photos/whitehouse/5266855221/">Samantha Appleton</a>/White House

Christmas is only a couple of days away, and this week the Obama administration delivered a last-minute Christmas present to all of us, one that’s been 20 years in the making. On Wednesday, following a tortured history, the EPA finally released new standards that sharply reduce the emissions of mercury and other airborne toxins from power plants. David Roberts is jubilant:

This one is a Big Deal. It’s worth lifting our heads out of the news cycle and taking a moment to appreciate that history is being made. Finally controlling mercury and toxics will be an advance on par with getting lead out of gasoline. It will save save tens of thousands of lives every year and prevent birth defects, learning disabilities, and respiratory diseases. It will make America a more decent, just, and humane place to live.

The new standards for airborne toxins are expensive: they’ll cost upwards of $10 billion annually and will require dozens of old coal-fired power plants to shut down. The power industry, aided and abetted by the conservative press, has spent years retailing horror stories about blackouts all along the Eastern seaboard as the new rules take effect, but this is, unsurprisingly, little more than the usual doom-mongering. Brad Plumer provides the reality:

[An AP] survey found that the coal plants set to be mothballed are mostly ancient — the average age was 51 — and largely run without modern-day pollution controls, as many of them were grandfathered in under the Clean Air Act. What’s more, many of these plants were slated for retirement in the coming years regardless of what the EPA did, thanks to state air-quality rules, rising coal prices, and the influx of cheap natural gas. “In the AP’s survey,” she writes, “not a single plant operator said the EPA rules were solely to blame for a closure, although some said it left them with no other choice.”

Crucially, none of the operators contacted by the AP seemed to think that huge swaths of America were on the verge of losing power, as Jon Huntsman claimed. An official from the North American Reliability Corporation put it this way: “We know there will be some challenges. But we don’t think the lights are going to turn off because of this issue.” This jibes with an Edison Electric Institute study, as well as a Department of Energy study (which focused on worst-case scenarios), a study from M.J. Bradley & Associates, and the EPA’s own modeling (PDF). Utilities 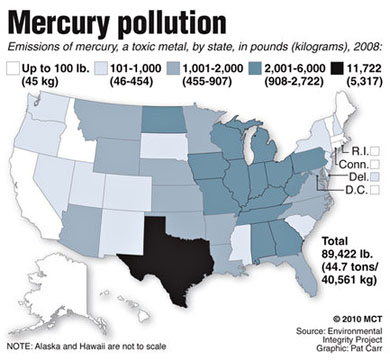 will manage to keep the power running, in part by switching to natural gas, as plenty of gas plants currently operate well below capacity.

So that’s the downside: $10 billion annually in costs and a difficult but manageable shutdown of obsolete power plants. And the upsides are enormous. Here’s the EPA’s estimate:

The total health and economic benefits of this standard are estimated to be as much as $90 billion annually….Combined, the two rules are estimated to prevent up to 46,000 premature deaths, 540,000 asthma attacks among children, 24,500 emergency room visits and hospital admissions. The two programs are an investment in public health that will provide a total of up to $380 billion in return to American families in the form of longer, healthier lives and reduced health care costs.

Much of this is due to reductions in particulate matter, not mercury, which suggests that, if anything, the EPA may be underestimating the benefits of the new rules. As Michael Livermore points out, mercury is a dangerous neurotoxin for small children, and the EPA’s analysis of that danger is limited to quantifying lost future earnings due to lower IQs. But even a grinch wouldn’t pretend that the cost of this kind of neurological damage is limited to lower wages. “There are,” says Livermore, “also risks of cognitive and social defects, negative autoimmune effects, genetic effects, and heart attacks that are not quantified.”

Those of us on the left have had plenty of opportunity to be disappointed with politics in general and with President Obama in particular over the past year. But although I think Dave Roberts exaggerates a bit comparing this rule to getting rid of lead in gasoline, he’s right that it’s a huge positive step for our country’s health, and one that’s long, long overdue. Merry Christmas, everyone.