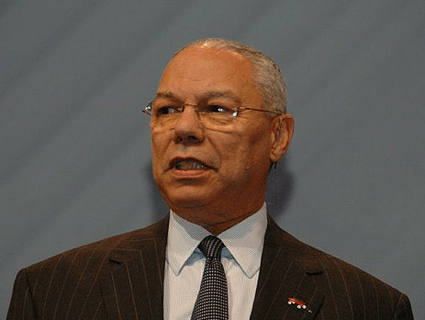 Former Secretary of State Colin Powell tells CNN he’s in favor of same-sex marriage, “either at the state or federal level”:

“I respect the fact that many denominations have different points of view with respect to gay marriage and they can hold that in the sanctity in the place of their religion and not bless them or solemnize them,” he said.

He said he has “a lot of friends who are individually gay but are in partnerships with loved ones, and they are as stable a family as my family is and they raise children. And so I don’t see any reason not to say that they should be able to get married under the laws of their state or the laws of the country.”

Powell’s remarks hint at the importance of the closet in forestalling acceptance of gays and lesbians—as they became more visible as people, either on screen or in Americans’ personal lives, the rationale for restricting their individual rights becomes more and more inscrutable (few people have written on this as eloquently as Andrew Sullivan). That’s why preventing the repeal of Don’t Ask Don’t Tell was so important to the anti-gay rights cause: It’s hard enough to maintain opposition to marriage equality when you know someone who is gay, but it’s even harder when it means people possibly losing their lives in combat and leaving behind families the law arbitrarily fails to recognize as legitimate.

In 1993, during the first fight over DADT, Powell argued that discriminating against gays and lesbians in uniform was entirely unlike discrimination on the basis of race. Powell called skin color a “benign, nonbehavioral characteristic,” that wasn’t comparable to sexual orientation. When President Harry Truman desegregated the military, of course, many Americans felt being black was neither ‘benign” nor “nonbehavioral”—they felt being black came along with a set of immutable character deficiencies that would harm the military. Years later, many Americans felt the same way about gays and lesbians.

Powell famously changed his mind about DADT and desegregation during the debate over repeal. In just ten years, Powell went from arguing that servicemembers should stay in the closet to supporting the rights of same-sex couples to marry. That evolution is in some ways even more dramatic than President Obama’s, given that many conservatives and liberals regarded the president’s opposition to marriage equality as insincere. Powell’s evolution also looks much more like the one the country itself is going through—an evolution that seems more inevitable every day.