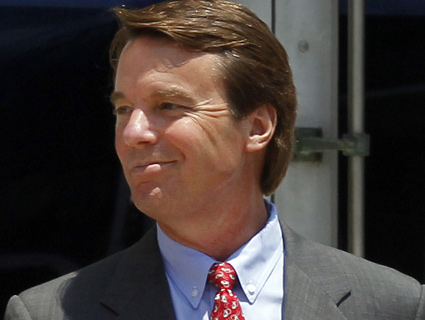 I have not watched the Edwards trial and I am not intimately familiar with the details of the evidence. But like Amanda Marcotte, I’m glad he was not convicted. I hope the prosecution decides to let it go. Being a horrible person is not a criminal act. If it were, we wouldn’t be able to build enough prisons.

But Amanda explains the real reason why prosecutors should close this case. In this day and age, in this era of obscene electoral profligacy, the pursuit was simply ludicrous:

With the news of Karl Rove crowing about how he intends to spend $1 billion in untraceable funds to beat Obama in 2012, it looks particularly ridiculous for the government to waste resources on a showboat prosecution. Even the conservative news magazine National Review had to denounce the prosecution as a waste. John Edwards has been disgraced, humiliated and run out of politics. Bringing the full force of the law down on him on top of it all just seems greedy.

In my opinion it was a witch trial, done more to exorcise society’s demons than to serve as a rational application of the law. Edwards behaved abominably and his life is ruined because of it. But I long ago stopped being shocked by people who, in the midst of personal crisis, behave with a lack of character and morals. I’m afraid that at this stage in my life I’ve seen too much of it to be so very, very sure that I can sit in judgment from afar.

Arcane federal election law is flouted every single day in ways that seriously threaten our democracy; using it merely to further humiliate an unpopular cad is a serious misuse of resources.  But I suppose we have to give credit where credit is due. Wall Street gamblers and high flying bankers have so far been smart enough not to do the one thing that can get important, high-profile, white males in trouble with the law: get caught paying for unauthorized sex. Other than that, it’s clear that pretty much anything goes.