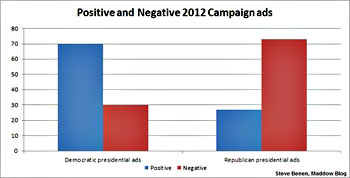 Steve Benen passes along a bit of raw data today about the kinds of ads that the Obama and Romney campaigns are running:

Perhaps now would be a good time for a quick reality check. Josh Green cited research from Kantar Media’s Campaign Media Analysis Group, which found that 63,793 presidential campaign ads have been broadcast since the start of the general election campaign on April 10. As Green noted, the data uncovered a noteworthy trend: “Democrats are running a largely positive campaign, while Republicans are running a mostly negative one.”

That’s….amazing. Not the fact that Democratic ads are 2:1 positive while Republican ads are 2:1 negative — exactly the opposite of the media spin you’re likely to hear these days — but the fact that the two campaigns have run 63,793 ads in six weeks. That’s 1,400 ads per day six months before the election. Yikes.