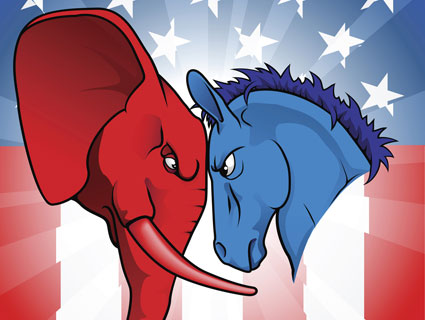 Ezra Klein points out today that presidential polling has been unusually stable this year: Neither Romney nor Obama has managed to open up a lead of more than a couple of points over the past 12 months:

But it’s not a disclaimer I fully believe. Permanent campaigns, mass media and bitterly divided parties has, I suspect, encouraged many voters to form a preference earlier than was true in past elections. Or, as Balz and Cohen put it, “the lack of movement underscores intense polarization—about nine in 10 Republicans back Romney, and a similar proportion of Democrats support Obama—and a relatively small percentage of voters say there is a ‘good chance’ that they could change their minds before November.”

When I was growing up, one of the big deals in political science was the steady deterioration of party loyalty: People simply didn’t vote the party line the way they had in the past, which made presidential campaigns more volatile. That trend continued for a long time, but seems to have plateaued around 2000 or so, when we famously became a 50-50 nation and party cues apparently began to reassert themselves. It might be more accurate to say that most voters have ideological loyalties these days, rather than party loyalties per se, but I’m not sure that’s much more than a semantic difference in the end. There just aren’t many independents left who genuinely switch their party loyalties from election to election.

Will this 50-50 split persist? A lot of smart people say that demographic trends are steadily moving in favor of Democrats, and they make a good case. The young have turned sharply against Republicans over the past decade, and brand loyalty means their anti-Republican voting behavior is likely to persist over their entire lives. A lot of that was driven by George Bush and the Iraq war and might therefore be expected to lighten up now, but new cohorts of the young continue to be repelled by the GOP’s anti-gay animus. And the steadily growing nonwhite vote is getting, if anything, even more loyal to the Democratic Party than it was in the past, thanks to Republican immigration stands driven by the tea party.

And yet, real-world events belie these trends. Republicans continue to be just as competitive in national elections as ever. It’s easy, of course, to chalk this up to events: 9/11 moved the electorate in a pro-Republican direction, while continuing economic stagnation has more recently moved them in an anti-incumbent—and therefore anti-Democratic—direction. But either the demographic argument is wrong, or else it’s been continuing apace, a growing tide held back by chance events. If the latter is true, Democrats should very soon start blowing Republicans out of the water in a very regular and very spectacular kind of way.

That sounds great, but I confess that I don’t see much sign of it. What am I missing?