The latest results from the Washington Post/ABC News poll are pretty interesting. Not because they tell us anything especially new — Obama is doing well in swing states — but because the magnitude of his lead is so astonishing. I did a bit of quick back-of-the-envelope arithmetic and concluded that Obama and Romney are probably dead tied 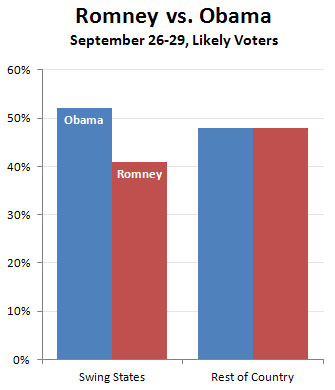 Are Obama’s ads really that much better than Romney’s? Is his early start in the ground game paying off this big? Or what? This sure seems like a surprisingly massive difference.