Democrats do want to raise taxes on families making more than $250,000. You sometimes hear Democrats say they just want to “restore the Clinton-era rates” for these folks, but that’s misleading. In addition to letting the Bush tax cuts expire, the White House wants to add about $700 billion in further tax increases on these taxpayers. And that’s in addition to the high-income taxes passed in the health-care law. Under Obama’s plan, taxes on the richest Americans would be much higher than under the Clinton tax code.

So yes, Democrats want to raise some taxes. But so do Republicans. They want to let the payroll tax cut and the various stimulus tax credits (notably the expansion of the Earned Income Tax Credit and the Child Tax Credit) expire. Those are the tax cuts that primarily help poor and middle-class Americans. In fact, 87.8 percent of the payroll tax cut’s benefits go to taxpayers making less than $200,000 and 99.9 percent of the stimulus tax credits’ benefits go to taxpayers making less than $200,000. 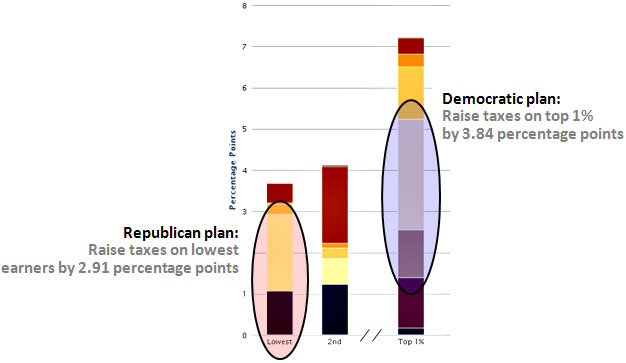