Ed Kilgore on the prospect for passage of the Manchin-Toomey background check amendment:

I’ve gotten a bit of flack from a progressive friend or two who think I’ve been insufficiently enthusiastic about Manchin-Toomey. To be clear, I think if it were actually to become law, it would indeed be an important step forward towards sane gun regulation, particularly given the stranglehold the NRA has possessed on the issue for so long. But surviving a filibuster on the motion to proceed to a debate in the Senate is at the very most a baby step, so we don’t know yet whether 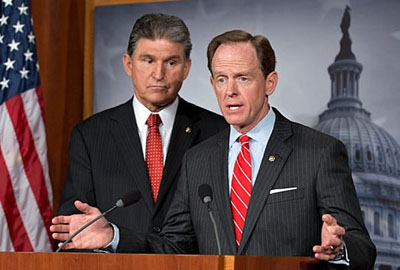 Manchin-Toomey represents a breakthrough or just another compromise on a road to ultimate defeat.

Hey, I’ve gotten a bit of flack too! Maybe we have the same friend?

I should probably update my post of yesterday on this subject. At the time I wrote it, there were few precise details available about what Manchin-Toomey does, and these kinds of compromise deals are really, really sensitive to the actual legislative language that’s agreed on. That’s still not available, but the fact sheet released later in the day put a bit more meat on the bare bones that were outlined at the press conference. In particular, it clears up their approach to the infamous “gun show loophole”:

This represents progress. Instead of going out to the parking lot of a gun show, you’ll have to go a bit further—or maybe agree to meet the next day somewhere else. That’s an extra hurdle, and that will make it a little less convenient for felons and the mentally ill to get hold of guns. However, it only make it a little bit less convenient, and the data is decidedly mixed on just how much effect this will have in the real world.

Bottom line: I’m a little more bullish on this than I was yesterday, but only a little. This is a baby step indeed. And it’s telling that despite its very modest ambitions—and despite the fact that it offers up several goodies for gun owners to make up for expanded background checks—the NRA has announced that they’re officially opposed to Manchin-Toomey and that this will be a scorable bill. If you vote for it, your NRA report card will suffer. This makes it worth supporting just for the symbolic value of demonstrating the NRA’s extremism, but it also makes it a lot less likely that even this baby step will ever see the light of day.